What does Joe mean?

[ 1 syll. joe, jo-e ] The baby boy name Joe is also used as a girl name, but it is much more common for boys. It is pronounced as JHow †. Joe is largely used in the English and French languages, and it is derived from Hebrew origins.

Joe is an English contraction of the name Joel (English and German).

Joe is also an English and French contraction of the name Joseph (English, French, and German).

Jo (Dutch, English, and Japanese contraction) is a variant of Joe.

Joe is a classic favorite. Currently it is still fairly popular as a baby name for boys, though it was in more widespread use in the past. Its usage peaked in 1936 with 0.754% of baby boys being given the name Joe. Its ranking then was #23. The baby name has since experienced a substantial loss in popularity, and is now of occasional use. In 2018, its usage was only 0.018% and its ranking #695, but it was nonetheless the 3rd most popular after Joseph and Joel, among all boy names in its group. In 2018, Joseph's use outnumbered Joe's by 28 times. Joe has predominantly been a baby boy name in the past century. In 1960, 54 times as many baby boys than girls were given the name Joe. 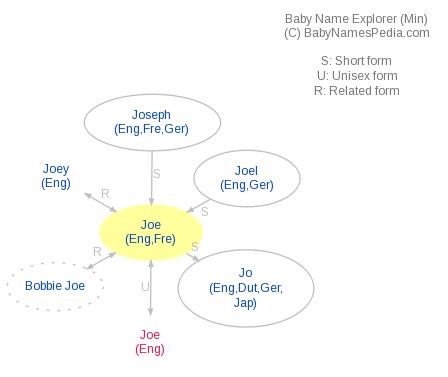