What does Joel mean?

[ 1 syll. joe(l), jo-el ] The baby boy name Joel is pronounced as JHOWL or JHOW-ahL (English) †. Joel is used chiefly in the English and German languages, and it is derived from Hebrew origins. The name's meaning is Yahweh is God. A biblical name, it is derived from the elements 'yahweh' name of God ; 'el' meaning God, powerful. Judhael (Breton), Judicael (Breton), Juhel (Breton), and Yeol (Hebrew) are old forms of Joel. Both the elements in the name refer to God, therefore implying that Yahweh is the true God. The name was borne in the Bible by one of 'mighty men' of King David, as well as an 8th century BC minor prophet who wrote the Book of Joel. The name was first used by English speakers in the medieval period, but often as a form of the Breton Judicael, Judhael or Juhel, which was borne by Saint Judicael ap Hoel (590-658), a Breton high king. The biblical name was adopted by 17th century English Puritans and other Christian fundamentalists. The name is in recent times more popular in the USA than elsewhere; it has also long been popular among the Jews. The name Joelle (English, French, and German) is the female form of Joel.

Joel is a classic favorite. At present it is still a popular baby name for boys, though it was in more widespread use before. The name's popularity rose from the 1900s up to the 1980s; before that, it was of occasional use only. At the modest peak of its usage in 1980, 0.246% of baby boys were given the name Joel. It ranked at #66 then. The baby name has since experienced a fall in popularity. In 2018, its usage was 0.110% and its ranking #187, but it was nonetheless the most popular out of all boy names in its group. In 2018, 6 times more boys were named Joel than the next most popular name, Joe. 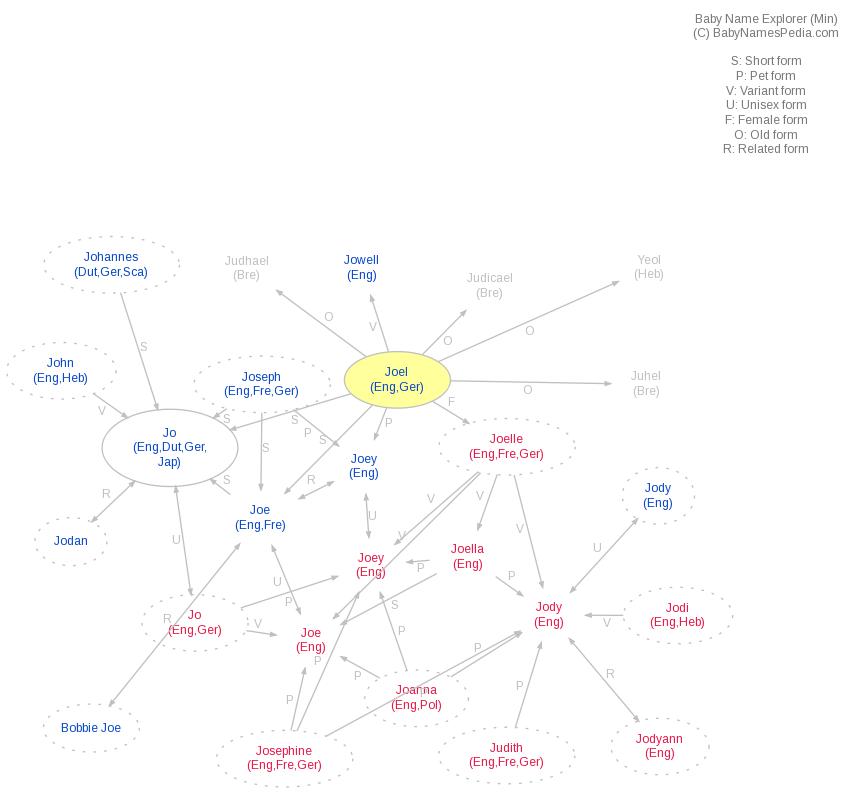