What does John mean?

[ 1 syll. joh(n), jo-hn ] The baby boy name John is pronounced as JHAAN in English †. John is used chiefly in the English and Hebrew languages, and its origin is Hebrew. The name is of the meaning Yahweh is gracious, Yahweh is merciful. The name was borne by several persons in the Old Testament of the Bible, including one of the mighty men of David. In the New Testament, the name was borne by several important characters, including John the Baptist (original name Yochanan ben Zechariah) who baptized Jesus, John the Apostle (original name Yochanan ben Zibhdi) who was the most-loved disciple of Jesus, and John the Evangelist who authored the fourth gospel. The latter two characters are believed by some to refer to the same person.

The source form Yochanan (Hebrew), itself a contracted form of Yehochanan (Hebrew) of the elements 'yahweh' and 'chanan', was written in Greek as Ioannes (Old Greek). In the Christianized Roman Empire, the name became Iohannes (Latinized), which reflected the phonetic spelling of the Greek form. Various forms were adopted elsewhere, such as Ieuan (Old Welsh) in the newly converted Ireland. The 'Y' sound was replaced by 'J' in some cases, producing Johannes (Latin) as well as Jehan (Old French) which was used in Gaul. In the 11th century, the Norman Conquest introduced the name Jehan into England, and it was Anglicized as Johan (Early Middle English). Middle English names were typically monosyllabic, so Johan was later shortened to Jan, Jon, or John.

The name in its various forms has been borne by numerous rulers, including eight emperors of the Byzantine Empire and kings of England, France, Sweden, Denmark, Hungary, Poland, Portugal, and other parts of Europe. In the 13th century, King John's reputation for treachery diminished the popularity of the name, especially among royal families in England. Among English Puritans and other Christian fundamentalists, the name has long been widely used, given its strong biblical associations. The name was borne by numerous saints and no fewer than twenty-three popes.

The popularity of the name continued to gain ground throughout and after the medieval period; by the late 17th century almost 30 percent of English babies were given the name. In the 20th century, the popularity of Pope John XXIII (Angelo Giuseppe Roncalli, 1881-1963), who was known in Italy as 'The Good Pope', also inspired many Roman Catholics to adopt the name. The term 'John Bull' is used to refer to the typical Englishman; it was created in 1712 by the Scottish writer John Arbuthnot (1667-1735) and popularized by print makers and writers. The name Jane (English) is the female form of John.

What are the Variant Forms of John?

John is a classic favorite. At present it is still a very popular baby name for boys, though not to the extent it was previously. In 1900, 6.061% of baby boys were given the name John. Its ranking then was #1. The baby name has since experienced a steep loss in popularity, and is today of occasional use. In 2018, its usage was only 0.473% and its ranking #27, but it was nonetheless the most popular within all boy names in its group. In 2018, John was more widely used than the next most popular name, Jack, by 3.231% . The name John has been predominantly given to baby boys, though it has also been used as a girl name in the past century. In 1988, John as a baby boy name outnumbered its use as a girl name by 169 times. 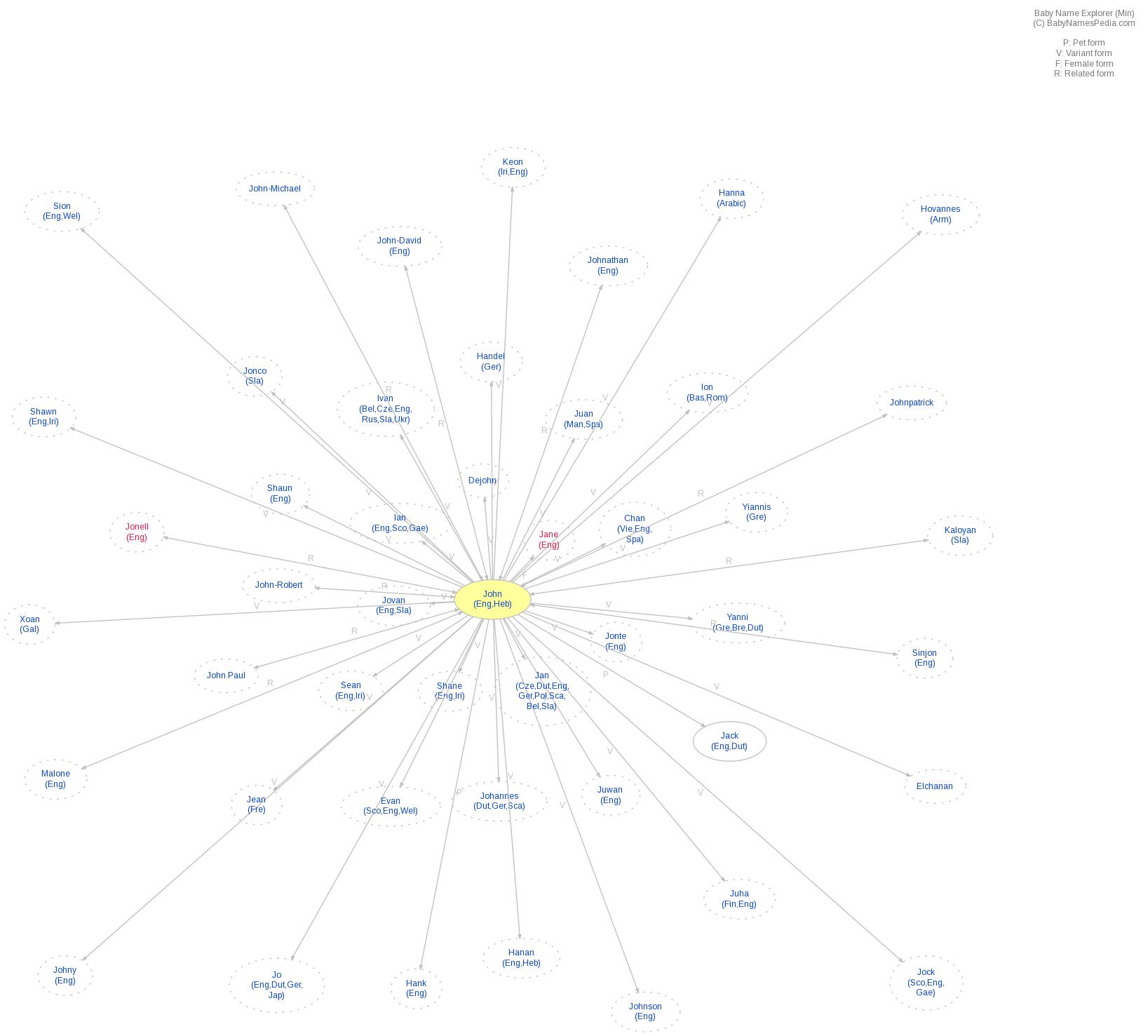