What does Jolene mean?

[ 3 syll. jo-le-ne, jol-ene ] The baby girl name Jolene is pronounced JHowLIYIYN †. Jolene's language of origin is English and Hebrew. It is predominantly used in the English language. The name is a recent coinage from the combination of the first element Jo with '-lene', which could have been derived from another name with such an ending, such as Marlene. The name was popularized by the 1974 hit single 'Jolene', sung by Dolly Parton.

Jolene is a variant of Joline (German and English) in the English language.

Jolene is also a variant of Josephine (English, French, and German).

Jolene has 26 variants that are used in English and foreign languages. Variants of the name used in English include Jolaine, Jolane, Jolanne, Jolayne, Jole, Joleene, Jolena, Jolenna, Jolina, Jollene, Jolyane, Jolyn, Jolyna, Jolyne, and Jolynn. Other English forms include the contraction Jo, and the variant spellings Joeleen, Joelene, Joeline, Jolean, Joleane, Joleen, Joline, and Jolleen. Jolien (Dutch) is a variant of Jolene that is in foreign languages. Another foreign variant is the familiar form Jolie (French).

Variant forms share the origin and thus the meaning of Jolene.

Jolene is a rather popular baby girl name, and it is also viewed as trendy. At the peak of its usage in 1974, 0.067% of baby girls were given the name Jolene. It was #245 in rank then. The baby name has suffered a steep drop in popularity since then. In 2018, it ranked at #455 with a usage of 0.037%, somewhat regaining its popularity in the recent decade. Out of all girl names in its family, Jolene was the 2nd most popular after Josephine. It was 4 times more frequently used than Jolene in 2018. 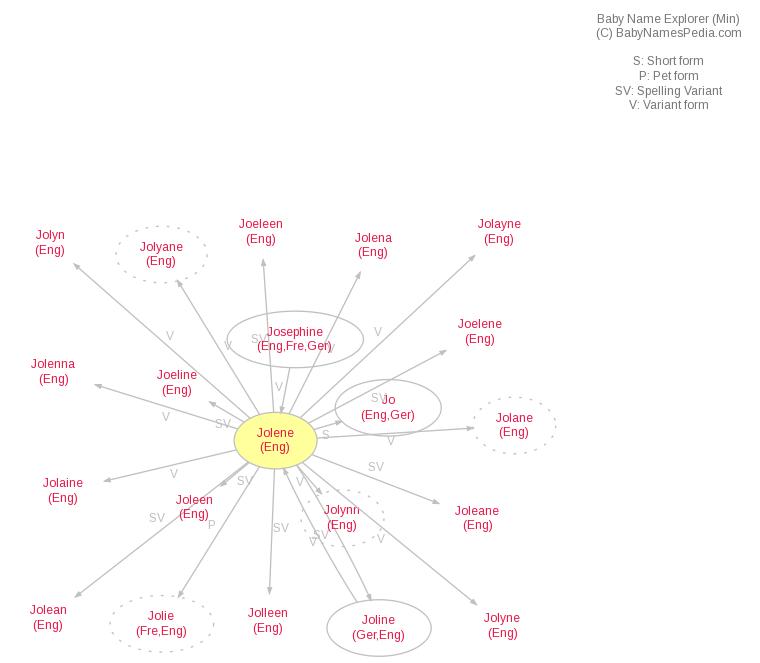