What does Jonah mean?

[ 2 syll. jo-nah, jon-ah ] The baby boy name Jonah is pronounced in English as JHOW-Nah †. Jonah is used chiefly in the English, French, Scandinavian, and Spanish languages, and its origin is Hebrew. A biblical name, it is derived from the element 'yonah' meaning dove. Yonah (Hebrew) is an original form of Jonah. The name was borne in the Bible by a prophet who was thrown overboard by his shipmates for disobeying God and thereby causing a storm; he was later swallowed by a whale and delivered to land. The biblical story was very popular in medieval times, and the name was consequently adopted by the English Puritans in the 17th century. Sailors traditionally use the name to personify someone who brings bad luck; the association somewhat diminished the popularity of the name in the past. The name Yonina (English and Hebrew) is the female form of Jonah.

Jonah has 14 variants that are used in English and other languages. Variants used in English include Joah, Joenah, Jona (used in Hebrew as well), Jonas (used in French, German, Greek, Scandinavian, and Spanish as well), and Jonasco. 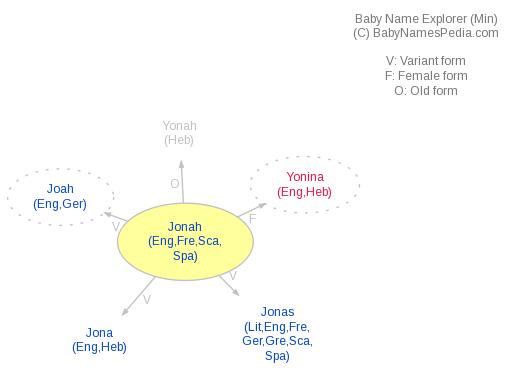