What does Jonathan mean?

[ 3 syll. jo-nat-han, jon-ath-an ] The baby boy name Jonathan is pronounced as JHAAN-ah-THahN in English or YOW-Naa-TaaN in German †. Jonathan is largely used in the English, German, and Hebrew languages, and its origin is Hebrew. The name is of the meaning Yahweh has given, gift of Yahweh. A biblical name, it is derived from the elements 'yahweh' name of God ; 'nathan' meaning to give. Jehonathan (Hebrew) and Yahonathan (Hebrew) are older forms of Jonathan. The name was borne in the Bible by the oldest son of King Saul who was noted for his manliness; he was also a close friend of David even though the latter was not on good terms with his father. The name therefore was often associated with unwavering friendship. It was first adopted by English speakers in the 13th century, and was widely used by the 17th. The term 'Brother Jonathan' is used to personify the typical American; it was first adopted by the Loyalists as a somewhat derisive term to describe the Patriots. The name Jonatha (English) is the female equivalent of Jonathan.

Jonathan is a widely used name; it has 31 variants that are used in English and other languages. Variants used in English include Janathan, Jhonathan, Johathan, Johnathen, Johnathyn, Johnthan, Jon Jon, Jonaten, Jonatha, Jonathin, Jonathyn, Jonaton, Jonatyn, Jonethen, Jonnatha, Jonnathan, Jonnathun, Jonny, Jonothan, and Jonthan. Other English forms include the contractions Jon and Nathan, and the variant spellings Johnathan, Johnathon, Jonathen, and Jonathon.

Jonathan is popular as a baby name for boys. The name's popularity jumped from the 1900s up to the 1980s. At the height of its usage in 1985, 1.254% of baby boys were given the name Jonathan. Its ranking then was #17. The baby name has since experienced a fall in popularity. In 2018, its usage was 0.296% and its ranking #63, but it was nonetheless the 2nd most popular after Nathan, within all boy names in its group. In 2018, it was 19% more regularly used than Jonathan. Jonathan has predominantly been a baby boy name, though in the past century it has also been used for girls. In 1988, baby boys named Jonathan outnumbered girls by 141 times. 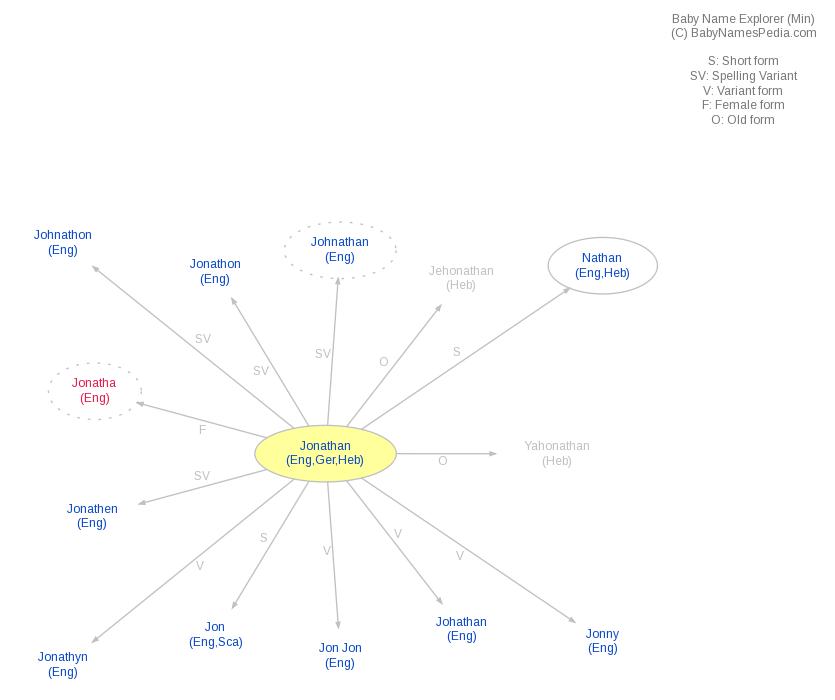