What does Joseph mean?

[ 2 syll. jo-sep(h), jos-e-ph ] The baby boy name Joseph is pronounced as JHOW-SahF in English, ZHow-ZEHF in French, or YOW-ZehF in German †. Joseph is used predominantly in the English, French, and German languages, and its origin is Hebrew. The name's meaning is Yahweh will add (another son). A biblical name, it is derived from the element 'yacaph' meaning to add, to increase. The name was borne by the eleventh and most beloved son of Jacob in the Old Testament of the Bible, after whom one of the twelve tribes of Israel was named. He was sold into slavery by his jealous brothers, whom he finally forgave and was reconciled with after he rose to become the right-hand man of Pharaoh in Egypt. The name was also borne by the husband of Mary, the mother of Jesus in the New Testament, as well as a rich Jew named Joseph of Arimathea, who retrieved Jesus' body from the Cross and buried it in a tomb made of stones. The baby name was commonly used by English speakers in the Middle Ages, and it became more widespread after the Reformation. The name Josephine (English, French, and German) is the female version of Joseph.

What are the Variant Forms of Joseph?

Joseph is a widely used name; it has 138 variants that are used in English and other languages. Variants used in English include Giuseppe (used in Italian too), Hohepa, Jessop, Jessup, Jodi, Jodie, Joeseph, Joesph, Joosep, Joosepe, Joosepi, Jopi, Jopie, Jos, Joseff, Josephat, Josephie, Josheph, Joslin, Jospeh, Joss, Josslin, Josu, Jozeff, Jozeph, Jóska, Jusepe, and Yussel. Other English forms include the short forms Jo (used in Japanese too) and Joe (used in French too), the diminutive forms Jody, Joey, Jojo, Josey (used in Spanish too), and Josie (used in Scottish too), and the variant spelling Josephe (used in French too).

Joseph is a classic favorite. Today it is still very popular as a baby name for boys, though not to the extent it was previously. At the height of its usage in 1914, 2.755% of baby boys were given the name Joseph. It ranked at #5 then. The baby name has since experienced a fall in popularity, and is currently of occasional use. In 2018, its usage was only 0.495% and its ranking #23, but it was nonetheless the most popular within all boy names in its group. In 2018, Joseph was twice as popular as the next most popular name, Jose. Joseph has mostly been a baby boy name, though in the past century it has also been used for girls. In 1988, the name Joseph was given to 153 times as many baby boys than girls. 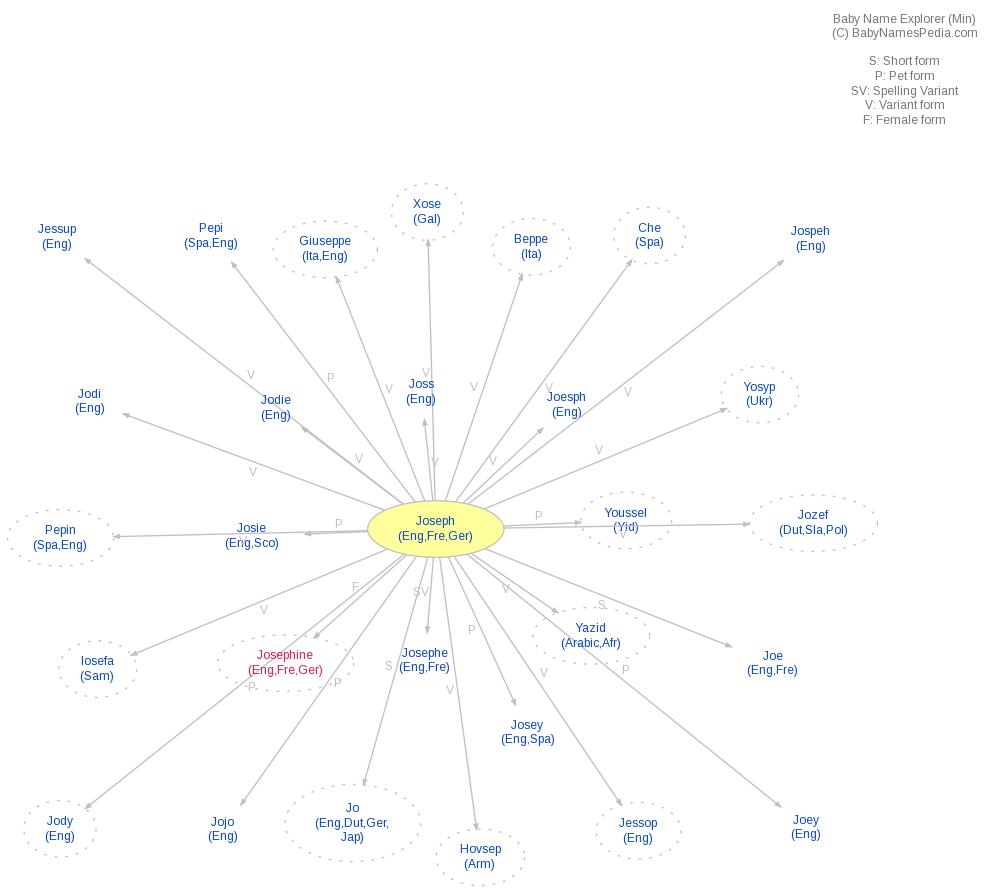