What does Josephine mean?

[ 3 syll. jo-sep-hi-ne, jos-eph-ine ] The baby girl name Josephine is pronounced JHOW-Sah-FiyN in English or Yow-Zeh-FIY-Nah in German †. Josephine's language of origin is Hebrew. It is predominantly used in English, French, and German. The name Josephine means 'Yahweh will add (another son)'. It is a biblical name derived from the word yacaph which is of the meaning 'to add, to increase'. The name was made popular by Napoleon's first wife, Empress Josephine (1763-1814). Josephine is the feminine version of the English, French, and German Joseph.

What are the Variant Forms of Josephine?

Josephine is a popular baby girl name, and it is also regarded as trendy. At the height of its usage in 1916, 0.749% of baby girls were named Josephine. It had a ranking of #21 then. The baby name has seen a steep drop in frequency since then. In 2018, it ranked at #91 with a usage of 0.164%, having regained some lost ground in the recent decade. Within all girl names in its family, Josephine was the most popular. Josephine was 93% more widely used than the 2nd most popular name, Josie, in 2018. The name Josephine has been mainly given to baby girls, although it has also been used as a boy name in the last century. There were 118 times more baby girls than boys who were named Josephine in 1911. 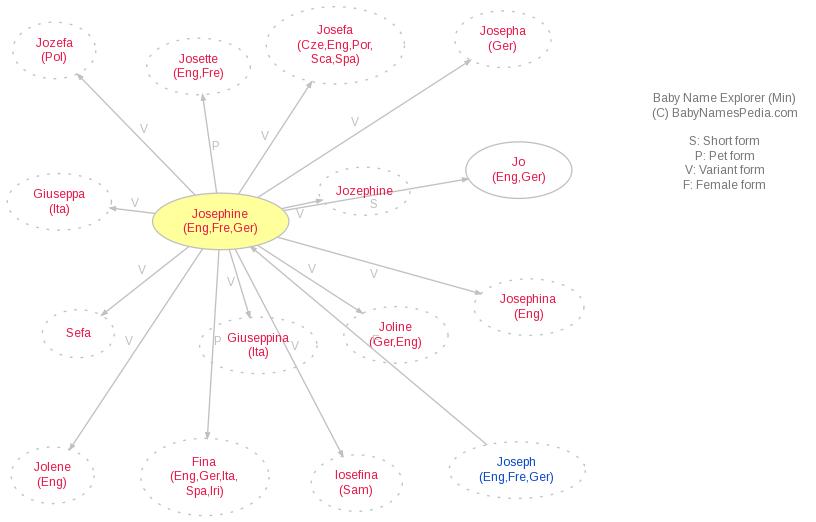