What does Joyce mean?

The Breton form of the name was borne by a 7th-century hermit saint who was the son of a Breton king. The name was brought into England by the Normans as the forms Josse (Old French), Josce (Old French), or Joisse (Old French), which were common among the Breton followers of William the Conqueror. It fell into disuse by the 14th century, and in the 17th century it saw a revival mainly as a female name, possibly as a form of the name Joy. In the 19th century, the name grew in popularity from its appearance in the Mrs Henry Wood sensation novel East Lynne (1861) and the Ada Ellen Bayly novel In the Golden Days (1885). The name is today often associated with the English words 'joy' or 'rejoice'. In some cases, its adoption has been influenced by the Irish surname, which is itself from the Norman French male name. A notable bearer of the surname was the Irish novelist James Joyce (1882-1941). See Joyce for more information.

Joyce has 16 forms that are used in English and foreign languages. English forms of Joyce include Joise, Joisse, Joos, Joost, Joyceanne, Joycee, Joycelyn, Joycelynn, Joycey, Joyous, Joyse, Joysel, and Loyce. Other English forms include the diminutive Joycie, and the spelling variant Joice. The Spanish Joyceta is a form of the name that is used in foreign languages.

Joyce is an all-time favorite. Today it is still somewhat popular as a baby girl name, but to a lesser degree than it was previously. At the height of its usage in 1941, 1.258% of baby girls were named Joyce. It had a ranking of #13 then. The baby name has seen a substantial decline in frequency since then, and in recent times it is of only modest use. In 2018, it ranked at #947 with a usage of 0.015%, but it was nevertheless the most popular within all girl names in its family. Joyce has mainly been a baby girl name in the last century. There were 270 times more baby girls than boys who were named Joyce in 1946. 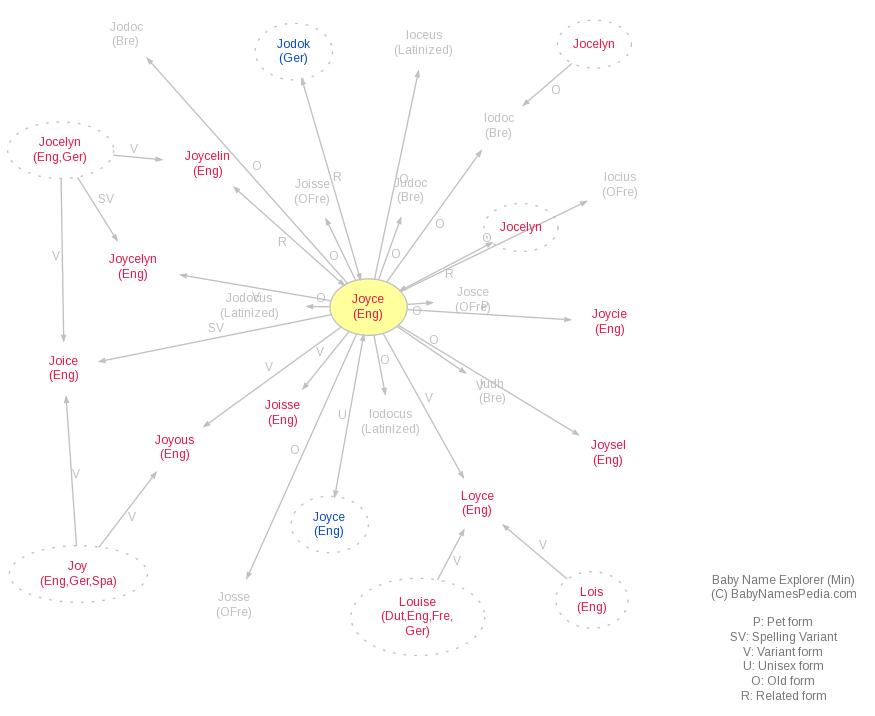