What does Juana mean?

[ 2 syll. j-ua-na, ju-ana ] The baby girl name Juana is pronounced HHWAE-N-aa- †. Juana's language of origin is Hebrew. It is predominantly used in Spanish and English. The name was borne by Juana of Castile (1479-1555), who was also known as Juana the Mad due to her obsession with her husband. She was known to English speakers as Joanna. Various forms of the name have been introduced to Americans by Hispanic settlers.

In addition, Juana is a Spanish form of the English Jane.

Juana is also a Spanish diminutive of the Spanish, English, and Hawaiian Juanita.

Juana is the feminine equivalent of the Manx and Spanish Juan.

Juana has 18 forms that are used in English and foreign languages. English forms of the name include Janina, Joanita, Juandalynn, Juanell, Juaneta, Juanetta, Juanisha, Juanna, Juannia, Juniata, Juwaneeta, Juwanita, and Yuana. Other English forms include the diminutives Janita (also used in Dutch, Finnish, Scandinavian, Spanish,), Juanita (also used in Spanish and Hawaiian), and Nita (also used in Spanish and Indian). The Hebrew Ianina is a form of Juana that is used in foreign languages. The diminutive Junita (Spanish) is another foreign form.

Variant forms inherit both the origin and meaning of the name Juana.

Juana is an uncommon baby girl name. At the modest height of its usage in 1926, 0.017% of baby girls were named Juana. It had a ranking of #486 then. The baby name has fallen from favor since then, and is of only sporadic use now. In 2018, within the family of girl names directly related to Juana, Jane was the most popular. 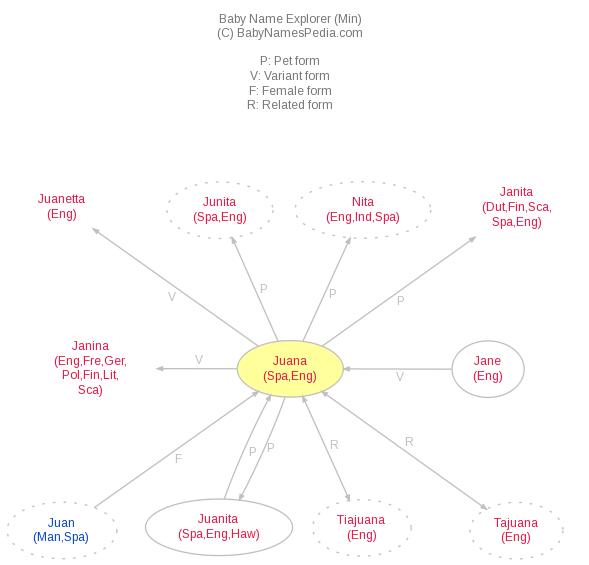