What does Judah mean?

[ 2 syll. ju-dah, jud-ah ] The baby boy name Judah is sometimes used as a girl name. Its pronunciation is JHUW-Dah in English †. Judah is used chiefly in the English language and its origin is Hebrew. The name is of the meaning praised, he who is praised. A biblical name, it is derived from the element 'yadah' which means to praise. Yehudhah (Hebrew) is an older form of Judah. In the Old Testament of the Bible, the name was borne by the fourth son of Jacob who founded one of the twelve tribes of Israel named after him. King David and Jesus were descendents of the tribe of Judah. Due to Jacob's words from the Bible, "Judah is a lion's whelp", the name has been traditionally associated with a lion, and thus with other names such as Arye and Leib. The name was consequently popular with Puritans during the Reformation. The name Joda is the female form of Judah.

Judah is popular as a baby name for boys, and it is also viewed as trendy. The name's popularity has been increasing since the 1990s; before that, it was of very modest use only. At the recent height of its usage in 2018, 0.103% of baby boys were given the name Judah. Its ranking then was #202. Within all boy names in its group, Judah was the 2nd most popular after Jude in 2018. It was 24% more commonly used than Judah in that year. Judah has predominantly been a baby boy name in the past century. 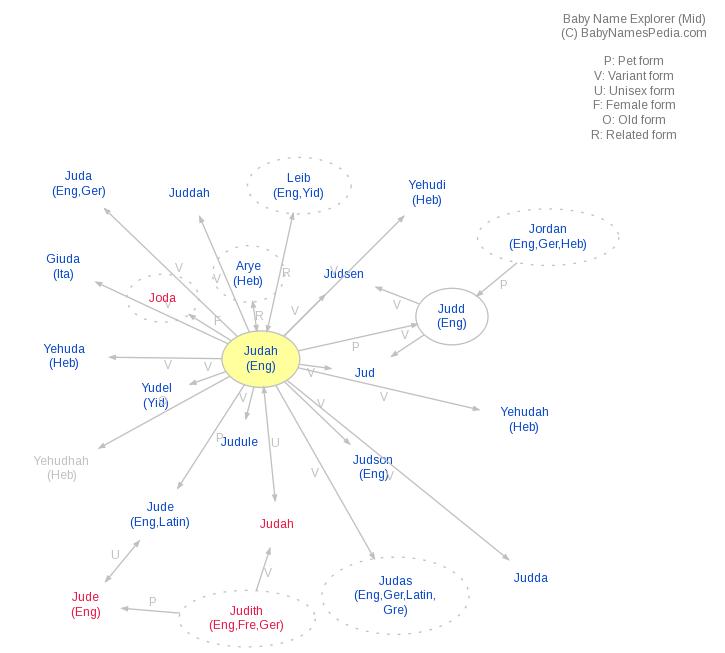