What does Judge mean?

[ 1 syll. ju-(d)ge, jud-ge ] The baby boy name Judge is pronounced JHah-JH †. Judge is of English origin and it is also predominantly used in the English language. Its meaning is derived literally from the ordinary word judge. This has been used by Stephen King for a character named Judge Farris in his horror novel The Stand (1990). In the case of the American actor Judge Reinhold (Edward Ernest Reinhold, 1957-), this was a nickname given by his father, who was a trial lawyer.

Forms of Judge include the names Judg and Juge.

Another variant of Judge is the pet form Judgie.

Judge is an uncommon baby name for boys. At the modest height of its usage in 1910, 0.018% of baby boys were given the name Judge. Its ranking then was #455. The baby name has since steeply declined in popularity, and is used only on a very light scale now. Within all boy names in its group, Judge was nonetheless the most frequently used in 2018. 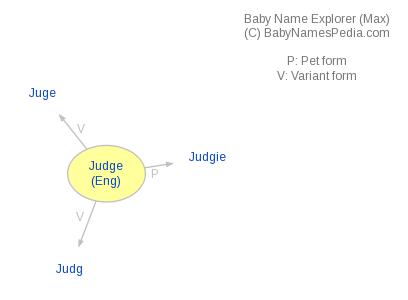