What does Judith mean?

[ 2 syll. ju-dit(h), jud-i-th ] The baby girl name Judith is pronounced in English as JHUW-Dih-TH, in French as ZHuw-DIYT, or in German as YUW-DihT †. Judith has its origins in the Hebrew language. It is used largely in English, French, and German. Biblical name: The name Judith means 'woman from Judea'. Yehudhith (Hebrew) is an original form of the name. The name was borne in the Bible by one of the Hittite wives of Esau. In the apocryphal Book of Judith, Judith was described as a beautiful widow who saved her people from the invading Assyrians by killing the general Holofernes. Prior to the Norman Conquest, the name was already used by English speakers, for example by King Alfred the Great's stepmother in the late 9th century. The name was also popular with Jews. In the 11th century, the name was known from the niece of William the Conqueror. The second daughter of William Shakespeare also bore the name in the late 16th century. In the 17th century, the name became more regular among English Puritans. In Scotland and Ireland, it has been taken as an Anglicization of the Gaelic Siubhan and Siobhán.

The name Judith is used to a great extent; it has 47 variant transcriptions that are used in English and foreign languages. English variant transcriptions of Judith include Hudes, Hutia, Ioudith (used in Greek as well), Jucika (used in Hungarian as well), Judah, Judana, Judeana, Judee, Judeena, Judetta, Judette, Judey, Judi, Judie, Judine, Judite (used in Latvian and Portuguese as well), Juditt, Juditta, Judye, Judytha, Judythe, and Julitta. Other English forms include the contracted forms Jodi (used in Hebrew as well), Jodie, and Judy (used in Hebrew as well), the diminutives Jodee, Jody, and Jude, and the spelling variants Judithe (used in French as well) and Judyth.

Judith is an all-time favorite. Currently it is still somewhat popular as a baby girl name, but not as much as it was in the past. The name's popularity increased from the 1900s up to the 1940s. Its usage peaked in 1940 with 1.894% of baby girls being named Judith. It had a ranking of #4 then. The baby name has substantially slipped in popularity since then. In 2018, it ranked at #850 with a usage of only 0.017%, but it was nevertheless the most regularly used among all girl names in its family. The name Judith has mainly been a baby girl name, although it has also been given to boys in the last century. There were 384 times as many baby girls than boys who were named Judith in 1946. 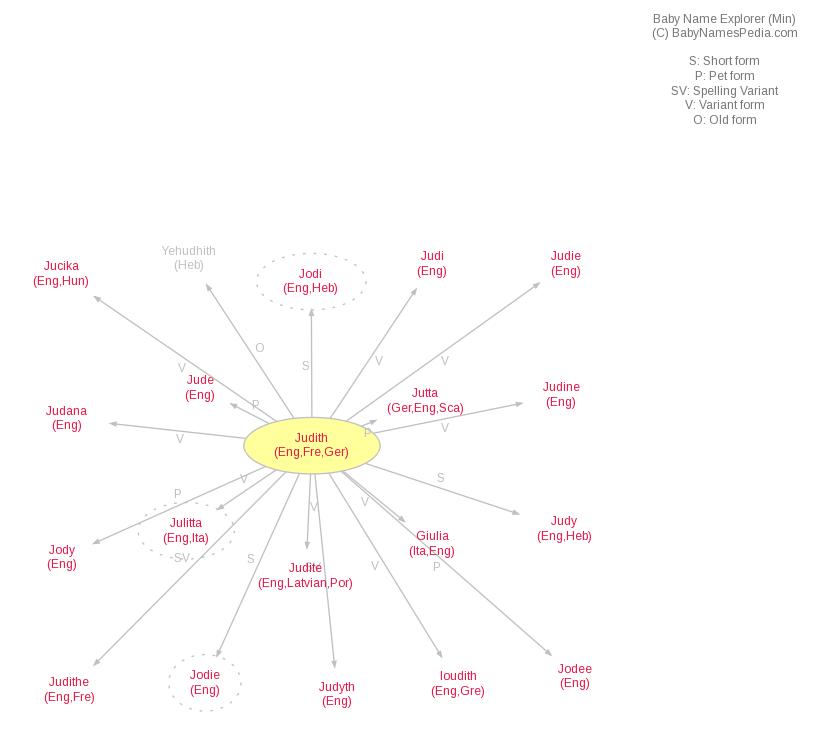