What does Jule mean?

[ 1 syll. ju-le, jul-e ] The baby boy name Jule is also used as a girl name, with the latter form being somewhat more common. It is pronounced as JHUWL †. Jule is used chiefly in the English language and its origin is Latin.

Jule is a pet form of the name Julian (English, German, Spanish, and Polish) in the English language.

Jule is also a pet form of the name Julius (English, German, and Greek) in the English language.

Jule is unusual as a baby name for boys. In 1900, 0.009% of baby boys were given the name Jule. Its ranking then was #689. The baby name has since experienced a fall in popularity, and is today of infrequent use. In 2018, among the group of boy names directly linked to Jule, Julian was the most popular. Although there were times before 1908 that Jule was more popular with boys, today it is somewhat used more commonly as a girl name. 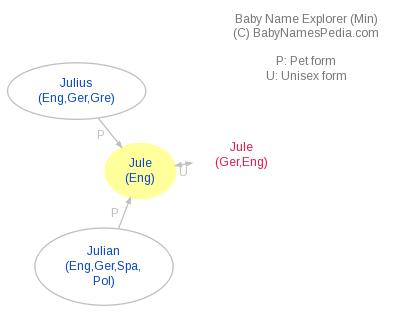