What does Julia mean?

[ 3 syll. ju-lia, jul-ia ] The baby girl name Julia is pronounced in English as JHUW-Liy-ah, in German as YUW-Liy-aa, in Polish as YUHL-Yaa, or in Spanish as HHUW-LYaa †. Julia is of Latin origin. It is used mainly in English, German, Polish, Portuguese, and Spanish. The name Julia means 'Jupiter's child, downy'. It is a biblical name derived from the word iovilius with the meaning 'dedicated to Jupiter'. An original form of the name is Julia (Latin). The Roman first name was borne in the Bible by a woman whom Paul addressed in his Epistle to the Romans. The name was also borne by various early saints. In literature, the name was borne by a character in the Shakespeare play Two Gentlemen of Verona (1592). The name was first adopted by English speakers in the 16th century, and saw a growth in popularity from the revival of classical names in the 18th century. Julia is the feminine form of the English, German, and Greek Julius.

What are the Variant Forms of Julia?

Julia is an all-time favorite. At present it is still popular as a baby girl name, but not as much as it was in the past. In 1900, 0.556% of baby girls were named Julia. It had a ranking of #46 then. The baby name has dropped in popularity since then, and is in recent times of modest use. In 2018, it ranked at #93 with a usage of 0.162%, but it was nevertheless the most popular among all girl names in its family. Julia was 62% more regularly used than the 2nd most popular name, Juliana, in 2018. Julia has mainly been a baby girl name, although in the last century it has also been used for boys. There were 82 times more baby girls than boys who were named Julia in 1908. 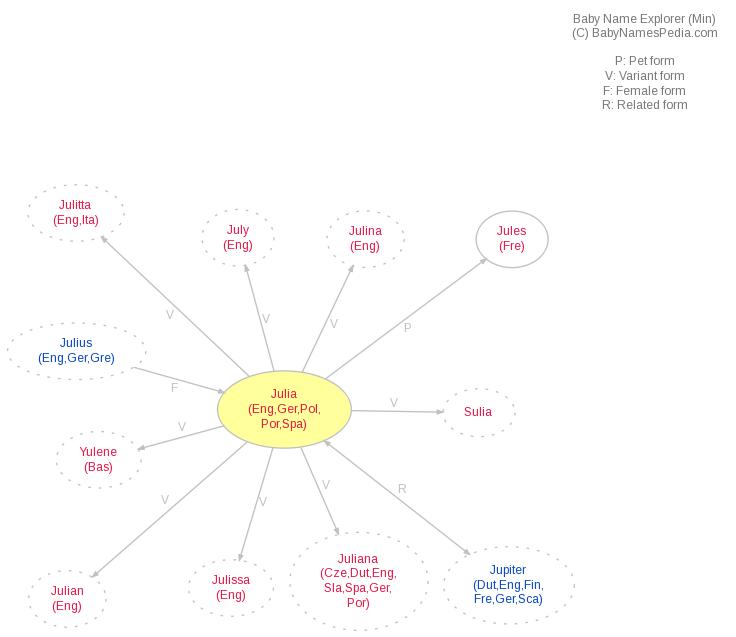