What does Julian mean?

[ 2 syll. ju-lian, jul-i-an ] The baby boy name Julian is sometimes used as a girl name. Its pronunciation is JHUWL-YahN or JHUW-Liy-ahN in English, YUW-Liy-aaN in German, or YUHL-YaaN in Polish †. Julian is used chiefly in the English, German, Spanish, and Polish languages, and its origin is Latin. The name is from the Roman nickname Julianus (Latin), which is itself from Julius. The name was borne by Flavius Claudius Julianus (332-363), also known as Julian the Apostate, who was the last polytheist Roman Emperor; he tried to re-institute Greco-Roman religion over Christianity in the Roman Empire. Several minor early saints also bore the name. The name was also bestowed on females in the medieval period, as borne by Julian of Norwich (1342-1416), one of the greatest English mystics. Up to the 16th century, the feminine use of the name had often been considered a variant of Gillian. The name was adopted regularly by English speakers by the 18th century.

The name Julian is used to a great extent; it has 24 variants that are used in English and other languages. Variants used in English include Halian (used in Zuni as well), Jilian, Jillian, Jilliann, Jolyon, Julean, Julen, Juliaan, Julianne, Julianus, Julio, Julion, Jullian, Jullien, Julyan, Julyin, and Julyon. The diminutive forms Jule and Jules (used in Dutch and French as well) are other English variants.

Julian is very popular as a baby name for boys, and it is also considered trendy. The name's popularity has been increasing since the 1950s. At the modest height of its usage in 2018, 0.431% of baby boys were given the name Julian. It ranked at #36 then. Within all boy names in its group, Julian was the most popular in 2018. 9 times more boys were named Julian than the next most popular name, Julius, in that year. Julian has mostly been a baby boy name in the past century. 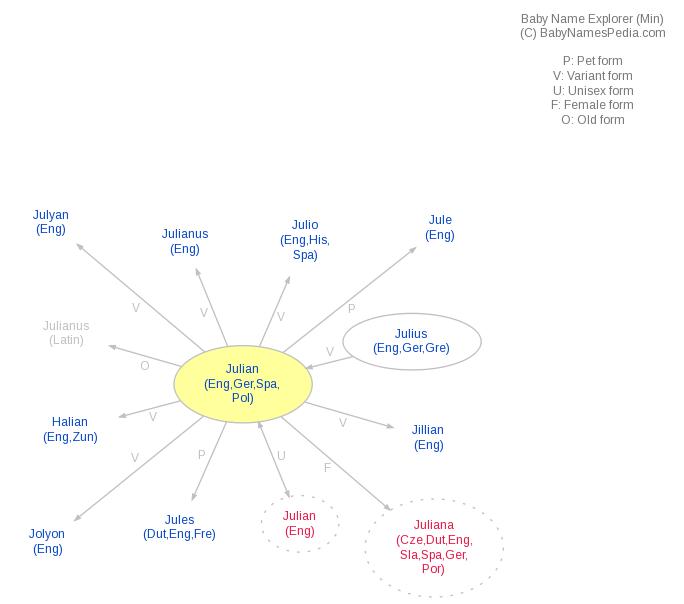