What does Juliana mean?

[ 4 syll. ju-lia-na, jul-i-ana ] The baby girl name Juliana is pronounced JHuw-Liy-AAN-ah (English), Yuy-Liy-AA-Naa (Dutch), or Yuw-Liy-AA-Naa (German) †. Juliana has its origins in the Latin language. It is used largely in Czech, Dutch, English, Slavic, Spanish, German, and Portuguese. An old form of the name is Juliana (Latin). The name evolved as a Latin feminine form of Julianus, as borne by the 4th-century Saint Juliana of Nicomedia, who was martyred under Diocletian in 304. She was popular in the Middle Ages; in the Netherlands, the name has been bestowed in honor of her even into recent times. The name has been adopted by English speakers since the 12th century and it saw a revival in 18th-century England.

In addition, Juliana is a form of the English, German, Polish, Portuguese, and Spanish Julia in the Czech, Dutch, English, Slavic, and Spanish languages.

Juliana is the feminine form of the English, German, Spanish, and Polish Julian.

The name Juliana is used to a great extent; it has 34 forms that are used in English and foreign languages. English forms of Juliana include Gill, Gillian, Huriana, Jil, Jill, Jillian, Juliann, Julianne, Julieana, Julieanna, Juliena, Julina, Julliana, Julyana, Julyanna, Leana, Leanna, and Liane (used in French and German too). Other English forms include the contracted form Liana (used in French, German, Italian, and Portuguese too), the diminutive Jule (used in German too), and the spelling variants Julianna (used in Hungarian too), Jullianna, and Yuliana (used in Russian, Slavic, and Spanish too).

Variant forms share the origin and thus the meaning of the name Juliana. 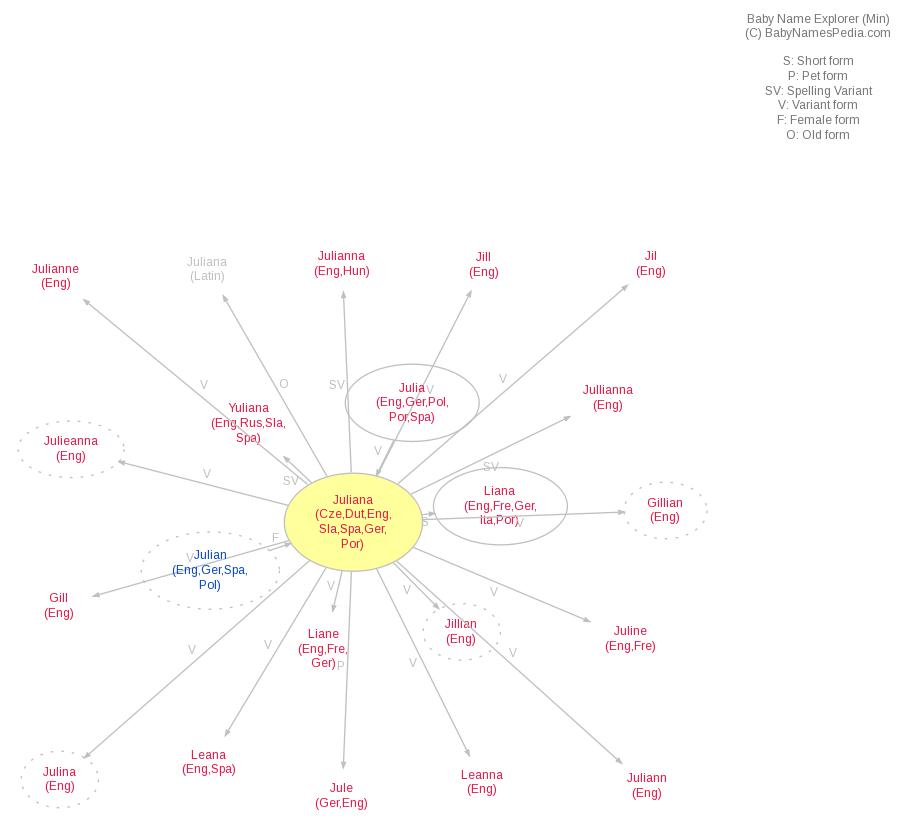