What does Julie mean?

[ 2 syll. ju-lie, jul-ie ] The baby girl name Julie is also used as a boy name, though it is far more popular for girls. It is pronounced JHUW-Liy in English or ZHuw-LIY in French †. Julie has its origins in the Latin language. It is used largely in English, French, and Scandinavian. Julie is a diminutive of the English, German, Polish, Portuguese, and Spanish Julia.

Julie is an all-time favorite. Currently it is still rather popular as a baby girl name, but to a lesser degree than it was previously. The name grew in popularity from the 1900s up to the 1960s; prior to that, it was of only modest use. At the height of its usage in 1969, 1.006% of baby girls were named Julie. It had a ranking of #12 then. The baby name has seen a substantial decline in frequency since then. In 2018, it ranked at #588 with a usage of 0.028%. Within the family of girl names directly related to Julie, Julia was the most popular. It was more widely used than Julie by 6 times in 2018. Julie has mainly been a baby girl name in the last century. 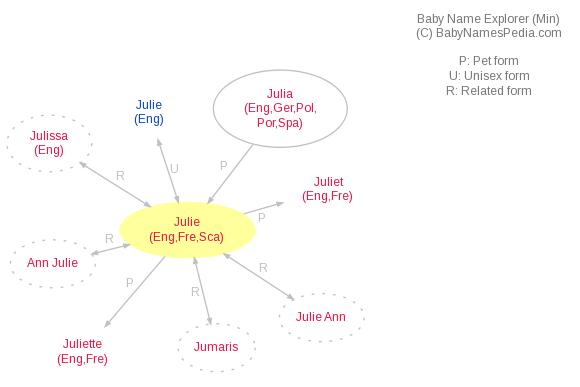