What does Julius mean?

[ 3 syll. ju-liu(s), jul-i-us ] The baby boy name Julius is pronounced in English as JHUW-Liy-ahS or in German as YUW-Liy-uhS †. Julius is used predominantly in the English, German, and Greek languages, and it is derived from Latin origins. The name's meaning is Jupiter's child, downy. Julius (Latin) is an original form of Julius. The first name is from the Roman family name, which is of obscure origin; some theories suggest a derivation from the element 'iovilius', or else from the Greek word of the meaning 'downy', referring to the tender facial hair of young males. The name was most well-known from the Roman emperor Gaius Julius Caesar (102-44 BC). The name was also borne in Greco-Roman mythology and in the Iliad by Ascanius Julius, also known as Iulus or Julus, the son of the Trojan hero Aeneas. Three popes have also borne the name. The name was adopted by English speakers from the 19th century, and has been used with both Christians and Jews. The name Julia (English, German, Polish, Portuguese, and Spanish) is the female version of Julius.

The name Julius is used to a great extent; it has 31 variants that are used in English and other languages. Variants used in English include Giulio (used in Italian too), Jolyon, Juie, Julas, Julee, Julen, Jules (used in French too), Juleus, Juley, Juli, Julian (used in German and Polish too), Julias, Julio (used in Hispanic and Spanish too), Julios, Julious, Jullian, Jullius, Juluis, Julyan, and Junius. The diminutive forms Jillean, Jillian, Jule, and Julie are other English variants.

Julius is a classic favorite. Today it is still fairly popular as a baby name for boys, though not to the extent it was in the past. Its usage peaked modestly in 1912 with 0.168% of baby boys being given the name Julius. It ranked at #100 then. The baby name has since experienced a fall in popularity, and in recent years it is of occasional use. In 2018, its usage was only 0.051% and its ranking #341, but it was nonetheless the 2nd most popular after Julian, among all boy names in its group. In 2018, it was used 9 times more than Julius. 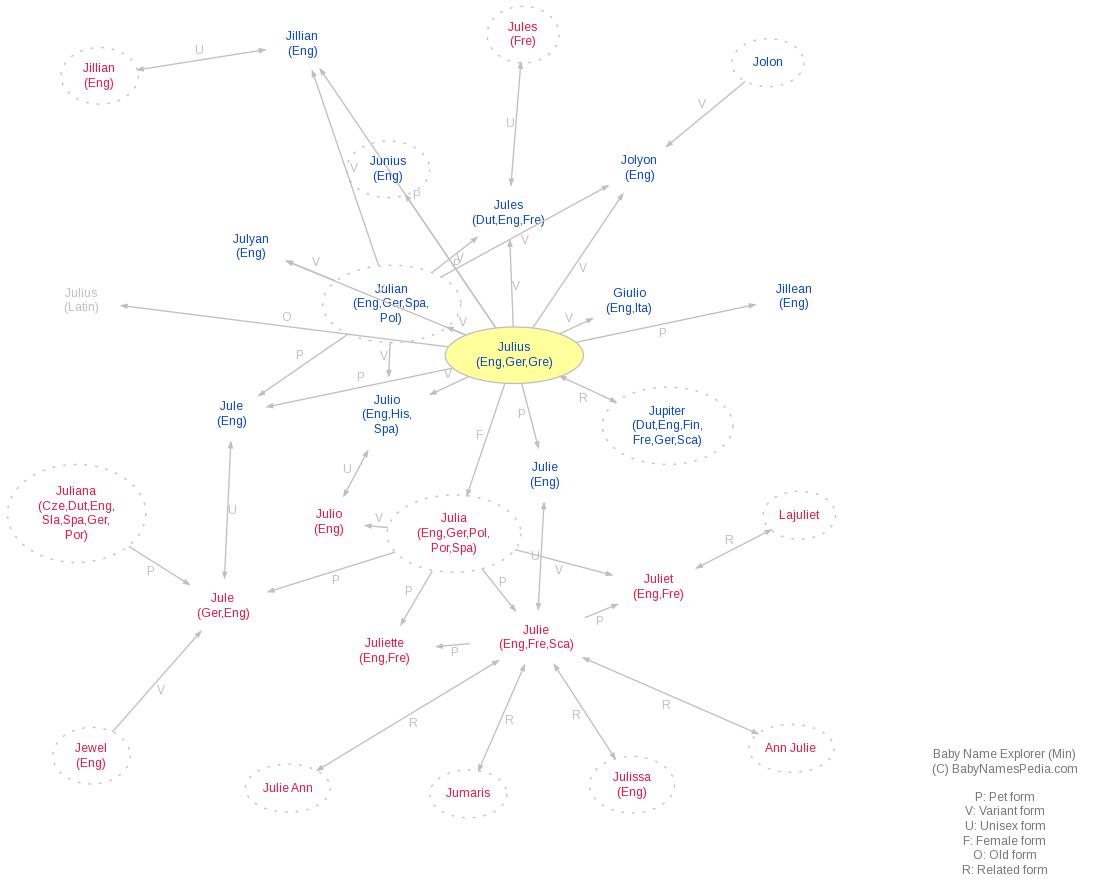