What does June mean?

[ 1 syll. ju-ne, jun-e ] The baby girl name June is also used as a boy name, though the use for girls is far more popular. It is pronounced JHuw-N †. June's language of origin is English and Latin. It is predominantly used in English. English origin: Its meaning is literally from the ordinary word June. The first name is derived from the name of the month; it was first used by English speakers in the early 20th century which saw a trend of using the names of months as first names. It is often given to girls born in the month of June.

June is a popular baby girl name, and it is also perceived as trendy. At the height of its usage in 1925, 0.526% of baby girls were named June. It had a ranking of #39 then. The baby name has steeply dropped in popularity since then. In 2018, it ranked at #241 with a usage of 0.073%, experiencing a small resurgence in the recent decade. Within all girl names in its family, June was the most frequently used. In the last century June has mainly been a baby girl name. There were 67 times more baby girls than boys who were named June in 1939. 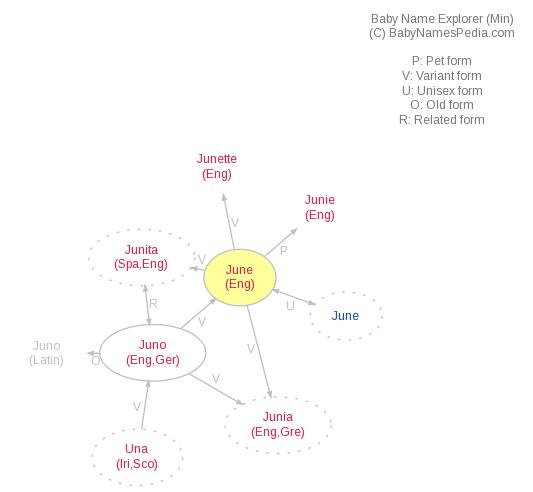