What does Justice mean?

[ 2 syll. ju-(s)ti-ce, jus-t-ice ] The baby boy name Justice is also used as a girl name, and more commonly so. Its pronunciation is JHAHS-TahS †. Justice is an English name of Old English origin. The name is of the meaning justice; judge. It is derived from the elements 'justice' ; 'justise' meaning justice ; 'justitia' justice. The name is from the Old French job title of a judge, which is ultimately of Latin roots. The name can also be taken as a direct derivation from the common English word.

Justice is fairly popular as a baby name for boys. The name jumped in popularity during the 1990s; before that, it was of very modest use only. At the height of its usage in 1996, 0.041% of baby boys were given the name Justice. Its ranking then was #320. The baby name has since experienced a loss in popularity. In 2018, its usage was 0.025% and its ranking #558, but it was nonetheless the most popular within all boy names in its group. In 2018, Justice was twice as popular as the subsequent ranked name, Justus. There were times from 1992 to 2010 when more boys than girls were named Justice, but currently it is more often than not a girl name. In 2017, 35% more girls than boys were given the name Justice. 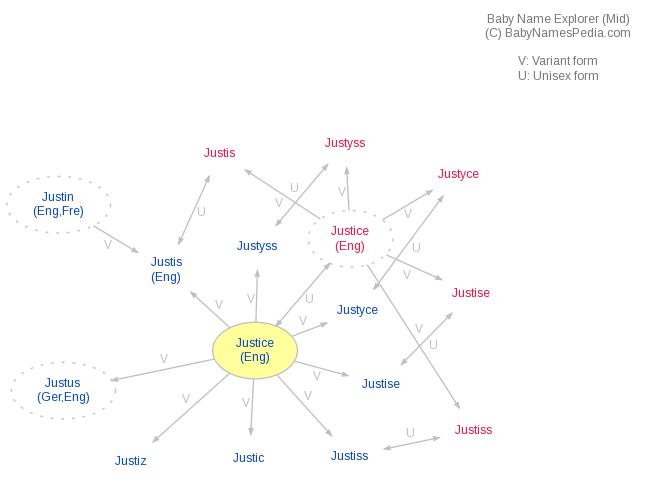