What does Justin mean?

[ 2 syll. ju-(s)tin, jus-t-in ] The baby boy name Justin is also used as a girl name, but it is much more common for boys. It is pronounced in English as JHAHS-TihN or in French as ZHuw-STEHN †. Justin is used chiefly in the English and French languages, and it is derived from Latin origins. It is derived from the element 'justus' meaning just, righteous, fair. The name is Anglicized from the old form Justinus (Latin), of which related forms are Justus (Latin) and Justinianus (Latin). The name was borne by various early saints such as the martyr and theologian Justin Martyr (-165), and by two Byzantine emperors including Justinian I (483-565) who united the Christian church temporarily and revised Roman law into the Justinian Code. It was adopted occasionally by English speakers in the late 19th century, and has since also appeared in other countries such as the Netherlands and Germany. The name Justine (English, French, and German) is the female form of Justin.

Justin is popular as a baby name for boys. The name's popularity rose from the 1930s up to the 1980s. Its usage peaked in 1988 with 1.752% of baby boys being given the name Justin. It ranked at #7 then. The baby name has since experienced a substantial loss in popularity. In 2018, its usage was only 0.144% and its ranking #141, but it was nonetheless the most popular among all boy names in its group. In 2018, 13 times more boys were named Justin than the subsequent ranked name, Justus. Justin has mostly been a baby boy name in the past century. In 1989, the name Justin was given to 158 times as many baby boys than girls. 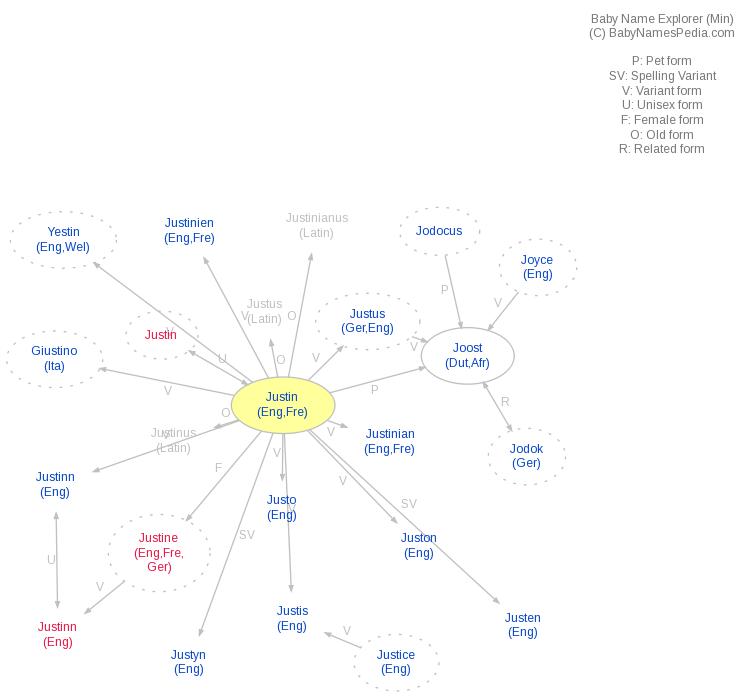