What does Kairo mean?

[ syll. kai-ro, ka-iro ] The baby boy name Kairo is pronounced as KEHAYRow †. The origin of Kairo is the Arabic language. Kairo is a variation of the name Cairo (English).

Kairo is a rather popular baby boy name. The name's popularity has been growing since the 2010s; before that, it was of very modest use only. Its usage peaked recently in 2018 with 0.031% of baby boys being named Kairo. It was #482 in rank then. Among all boy names in its family, Kairo was the most popular in 2018. Kairo was used 12% more than the subsequent ranked name, Cairo, in that year. 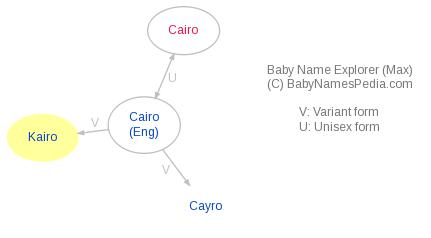