What does Kala mean?

[ 2 syll. ka-la, kal-a ] The baby girl name Kala is pronounced as Kaa-LAA- or Ker-Laa- †. Kala is used mostly in English, Hawaiian, and Indian. It is of Sanskrit and Hebrew origin. From Sanskrit roots, its meaning is art form; virtue.

In addition, Kala is a derivative of the English, African, Indian, and Swahili name Kali.

Kala is also a derivative (Hawaiian) of the English, French, German, Hebrew, and Scandinavian name Sarah.

The names Ka'la, Kahla, Kalah, Kalla, and Kallah are derivatives of Kala.

Kala is unusual as a baby girl name. Its usage peaked modestly in 1989 with 0.026% of baby girls being named Kala. It had a ranking of #467 then. The baby name has dropped out of favor since then, and is currently of sporadic use. In 2018, among the family of girl names directly related to Kala, Sarah was the most regularly used. 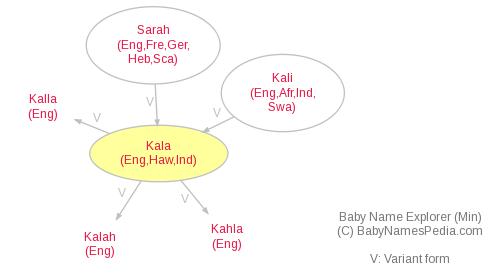