What does Kalen mean?

[ 2 syll. ka-len, kal-en ] The baby boy name Kalen is sometimes used as a girl name. Its pronunciation is KEY-LehN †. Kalen is used chiefly in the English and German languages, and its origin is Irish Gaelic, Germanic, and Celtic. The first name is from the surname, which is itself from a place name so called in Mecklenburg, northern Germany.

Kalen is a variant of the name Cale (English).

Kalen is also a variant of the name Kellen (English).

The names Kalan and Kallin are variants of Kalen.

Kalen is rare as a baby name for boys. At the modest peak of its usage in 1998, 0.008% of baby boys were given the name Kalen. It ranked at #859 then. The baby name has since experienced a fall in popularity, and is today of sporadic use. In 2018, out of the group of boy names directly linked to Kalen, Kellen was the most frequently used. Kalen has mostly been a baby boy name in the past century. 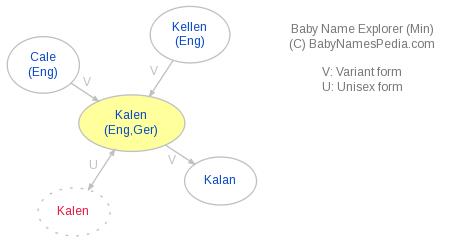