What does Kali mean?

[ 2 syll. ka-li, kal-i ] The baby girl name Kali is also used as a boy name, though the use for girls is far more popular. It is pronounced KAA-Liy- †. Kali's language of origin is Sanskrit and Old Greek. It is predominantly used in English, African, Indian, and Swahili. From Sanskrit roots, its meaning is 'black one; force of time' - in this context, Kali can be used in the African, English, Indian, and Swahili languages. It is derived literally from the word kali with the meaning 'black one'. The name was borne in Hindu mythology by the wife of Shiva and goddess of death and destruction. Her usual depiction is dark and violent. Through folk etymology, the name has come to mean 'force of time (kala)', and she is today considered the goddess of time and change.

In addition, Kali is an English form of the English and Greek Callie.

Kali is also an English form of the English and Greek Kalyca.

Kali has 12 forms that are used in English and foreign languages. English forms of the name include Kala, Kaleigh, Kaley, Kalie, Kallee, Kalley, Kalli, Kallie, Kally, Kallye, and Kaly. The Indian Kalee is a form of Kali that is used in foreign languages.

Kali is a popular baby girl name, and it is also perceived as rather trendy. The name has been rising in popularity since the 1980s; prior to that, it was of only very modest use. At the recent peak of its usage in 2018, 0.065% of baby girls were named Kali. It had a ranking of #274 then. Out of all girl names in its family, Kali was the 2nd most popular after Callie in 2018. It was more frequently used than Kali by 32% in that year. In the last century Kali has mainly been a baby girl name. 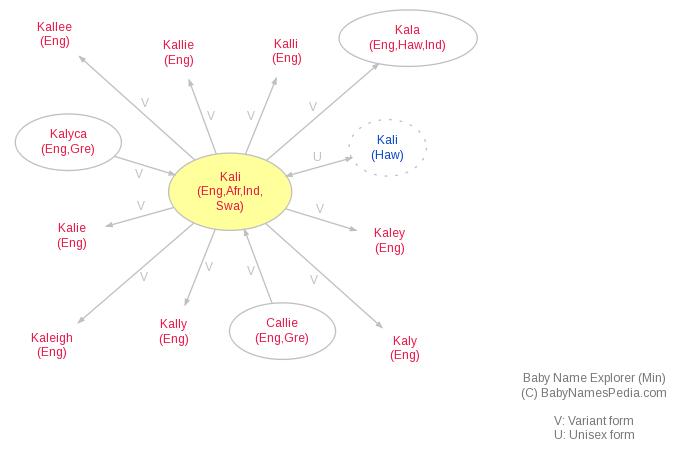