What does Kami mean?

[ 2 syll. ka-mi, kam-i ] The baby girl name Kami is also used as a boy name, though the use for girls is far more popular. It is pronounced KAA-Miy- or KAEM-iy- †. Kami's origin is Latin, Japanese, and Arabic, and its use, English, Japanese, Italian, and North African. From Japanese roots, its meaning is 'lord' - in this context, Kami can be used in the English and Japanese languages.

In addition, Kami is an English familiar form of the English, Finnish, German, Italian, Scandinavian, and Spanish Camilla.

Kami is also an Italian and North African contracted form of Kamila.

Kami is an uncommon baby girl name. At the modest height of its usage in 1972, 0.019% of baby girls were named Kami. It was #553 in rank then. The baby name has fallen from favor since then, and is of only sporadic use now. In 2018, within the family of girl names directly related to Kami, Kamila was the most frequently used. In the last century Kami has primarily been a baby girl name. 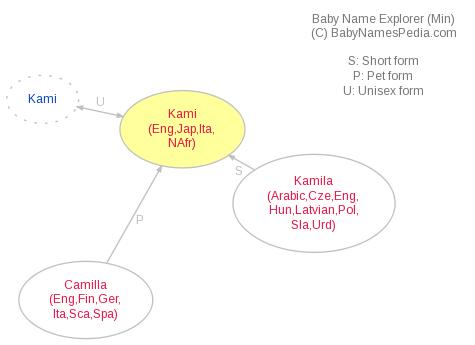