What does Karen mean?

[ 2 syll. ka-ren, kar-en ] The baby girl name Karen is pronounced in English as KAER-ahN or KEHR-ahN †. Karen is largely used in English, German, Scandinavian, and Dutch, and its origin is Old Greek. It is from the elements 'carus' which means dear ; 'katharos' pure. The name evolved as a Scandinavian form of Katharina. It could also be derived from the phonetically similar Latin element 'carus'.

What are the Variant Forms of Karen?

Karen is a classic favorite. Currently it is still a fairly popular baby name for girls, though it was in more widespread use in the past. The name's popularity increased from the 1920s up to the 1950s. Its usage peaked in 1956 with 1.945% of baby girls being named Karen. It ranked at #7 then. The baby name has since experienced a steep fall in popularity. In 2018, its usage was only 0.025% and its ranking #635. Among the group of girl names directly related to Karen, Katherine was the most frequently used. In 2018, it was used 6 times more than Karen. The name Karen has been mostly given to baby girls, though it has also been used as a boy name in the past century. In 1969, the name Karen was given to 250 times as many baby girls than boys. 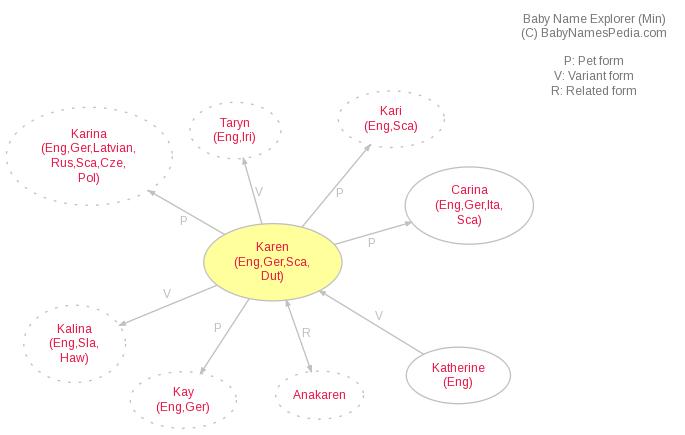