What does Karl mean?

Karl is a variant spelling of the English, German, and Scandinavian Carl.

Karl is also a German, Russian, Scandinavian, and Slavic form of the English and French Charles.

Forms of Karl include the familiar form Kalle (Scandinavian, Finnish, and German), and the variant spellings Carl (English, German, and Scandinavian), Karel (Czech, Dutch, and Slavic), and Karle (English).

Karl is a rare baby boy name. At the modest peak of its usage in 1963, 0.122% of baby boys were given the name Karl. It was #136 in rank then. The baby name has fallen from favor since then, and is of only irregular use now. In 2018, out of the family of boy names directly linked to Karl, Charles was the most widely used. 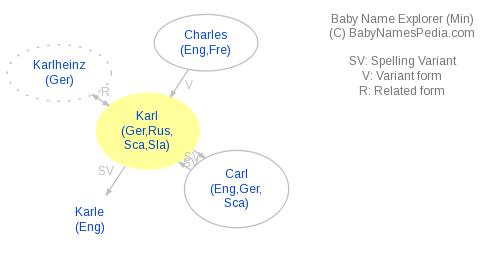