What does Karla mean?

[ 2 syll. kar-la, ka-rla ] The baby girl name Karla is pronounced in German as KAAR-Laa †. Karla has its origins in the Germanic language. It is used largely in the German, Scandinavian, Czech, and English languages.

Karla is an all-time favorite. Today it is still rather popular as a baby girl name, but to a lesser degree than it was in the past. The name's popularity rose from the 1930s up to the 1960s; before that, it was of only sporadic use. Its usage peaked modestly in 1964 with 0.105% of baby girls being given the name Karla. It was #182 in rank then. The baby name has experienced a drop in popularity since then. In 2018, it ranked at #626 with a usage of 0.026%. Among the family of girl names directly linked to Karla, Charlotte was the most commonly used. It was 27 times more commonly used than Karla in 2018. 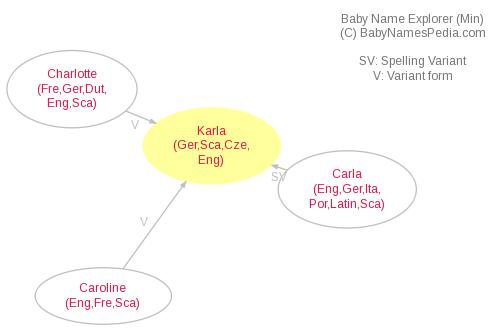