What does Katherine mean?

[ 2 syll. kat-he-ri-ne, ka-ther-ine ] The baby girl name Katherine is pronounced as KEY-THRihN or KEY-TH-eh-RihN †. Katherine is of Old Greek origin and it is used mainly in English. Original forms of the name include Aikaterine (Old Greek), Cateline (Old French), and Katharina (Latin). The name is of uncertain origin; it has from an early date been associated with the Greek katharos, which resulted in the '-th-' spelling in the name. This derivation is regarded by some as a misinterpretation by the Romans.

The name was later linked to the Greek aikia, in reference to the early 4th-century Saint Catherine of Alexandria, who was tortured on a breaking wheel before being beheaded; she is revered by Roman Catholics as one of the Fourteen Holy Helpers. Her popularity led to a widespread adoption of the name by English speakers in the Middle Ages, when it was introduced by the Normans. The name was later borne by Saint Catherine of Siena (1347-1380) who helped to establish peace among the Italian city states.

As an English royal name, Katherine has been borne by three of Henry VIII's wives, including Katherine of Aragon (1485-1536), the first wife whom the king later tried to divorce and thus led to him defying the pope. The name was later known from the queen consorts of Henry V and Charles II. Elsewhere, the name was borne by Catherine de' Medici (1519-1589), the ruthless wife of King Henry II of France, and Catherine II, also known as Catherine the Great, who reigned as Empress of Russia for 34 years and was widely regarded as an enlightened despot. In literature, the name appeared as the lead female character Catherine Earnshaw in the Emily Bronte novel Wuthering Heights (1847).

What are the Variant Forms of Katherine?

The origin and meaning of the name Katherine is inherited by all variant forms.

See also the related forms, the name Mary Katherine and the Yiddish Reina.

Katherine is an all-time favorite. Today it is still popular as a baby name for girls, though not to the extent it was in the past. Its usage peaked in 1988 with 0.580% of baby girls being named Katherine. It ranked at #27 then. The baby name has since experienced a decline in frequency, and is currently of occasional use. In 2018, it ranked at #112 with a usage of 0.144%, but it was nevertheless the most popular among all girl names in its group. 42% more girls were named Katherine than the 2nd most popular name, Kayla, in 2018. Katherine has mostly been a baby girl name, although in the past century it has also been used for boys. In 1904, the name Katherine was given to 49 times more baby girls than boys. 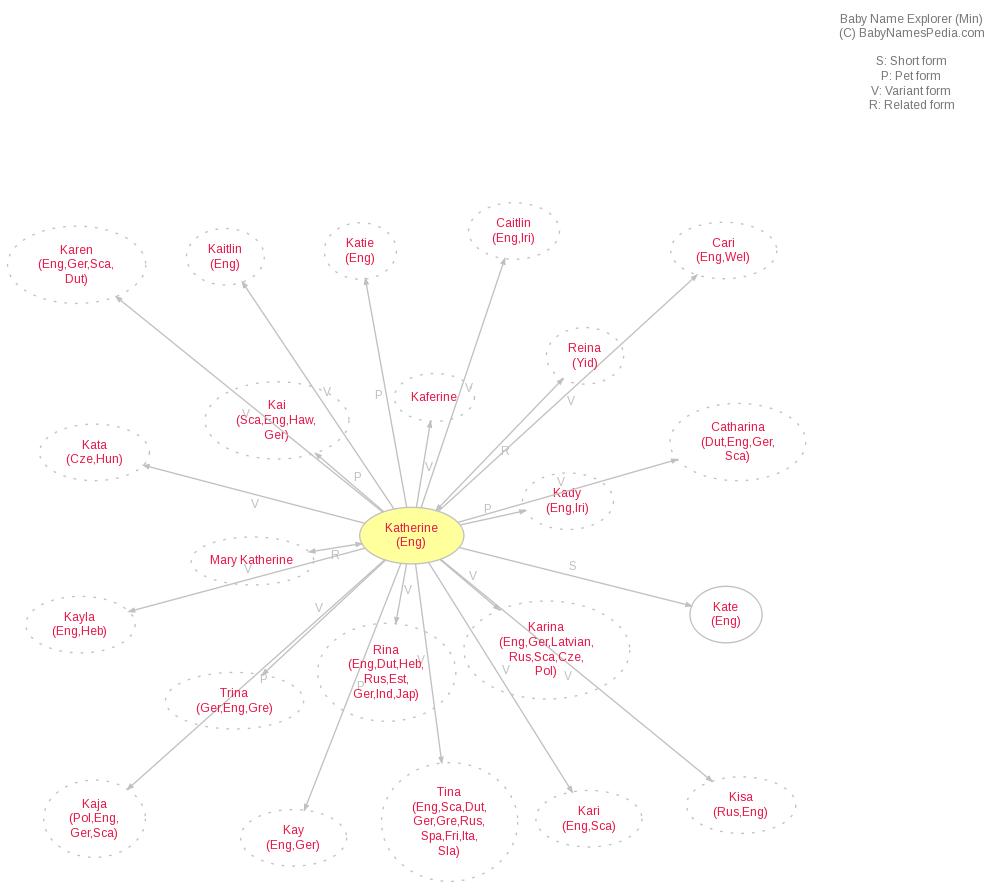