What does Katixa mean?

[ syll. ka-ti-xa, kat-ixa ] The baby girl name Katixa is pronounced KEYihKGAH †. Katixa's language of origin is Basque and it is also predominantly used in the Basque language.

Variant forms share both the origin and meaning of Katixa.

Tixie (diminutive form) is a variant of Katixa.

Katixa is a rarely used baby name for girls. It is not listed in the top 1000 names. 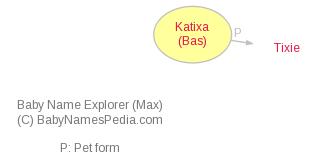