What does Kealoha mean?

[ 4 syll. kea-lo-ha, ke-al-oha ] The baby girl name Kealoha is pronounced KEH-ahLOWHHaa †. Kealoha's origin, as well as its use, is in the Hawaiian language. The meaning of Kealoha is 'beloved one'.

Kealoha is not commonly used as a baby girl name. It is not listed within the top 1000. 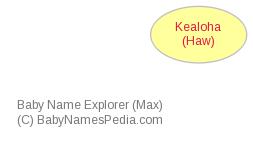