What does Keaton mean?

[ 2 syll. kea-ton, ke-at-on ] The baby boy name Keaton is sometimes used as a girl name. It is pronounced as KIY-TahN †. Keaton is used predominantly in the English language and its origin is Old English. It is derived from the element 'tun' which means town, settlement, homestead. The first name is from the surname which is itself of a place possibly meaning 'shed town'.

Keaton is fairly popular as a baby name for boys. The name's popularity jumped from the 1980s up to the 2000s; before that, it was of infrequent use only. Its usage peaked modestly in 2007 with 0.040% of baby boys being given the name Keaton. Its ranking then was #357. The baby name has since declined in popularity. In 2018, its usage was 0.027% and its ranking #541, but it was nonetheless the most regularly used among all boy names in its group. Keaton has predominantly been a baby boy name in the past century. 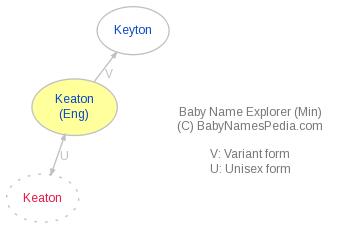