What does Keith mean?

[ 1 syll. kei-(t)(h), ke-i-th ] The baby boy name Keith is pronounced as Kiy-TH †. Keith is an English, Gaelic, German, and Scottish name of Celtic origin. It is derived from the element 'keth' meaning forest, windy place. The first name is from a Scottish surname, which is itself from a Scottish place name which means 'forest'; the local name could be from any of several places so named in East Lothian, such as the town of Keith near Elgin. The aristocratic surname was borne by the family of 13th century William Keith, the Great Marischal of Scotland. The first name was adopted by English speakers in the 19th century, and it has since been used by people with no Scottish connections. The name Keitha (English and Scottish) is the female form of Keith.

Keith is a classic favorite. At present it is still fairly popular as a baby name for boys, though not to the extent it was before. The name's popularity rose from the 1900s up to the 1960s; before that, it was of occasional use only. At the peak of its usage in 1966, 0.639% of baby boys were given the name Keith. It ranked at #32 then. The baby name has since suffered a marked loss in popularity. In 2018, its usage was 0.029% and its ranking #504, but it was nonetheless the most regularly used out of all boy names in its group. 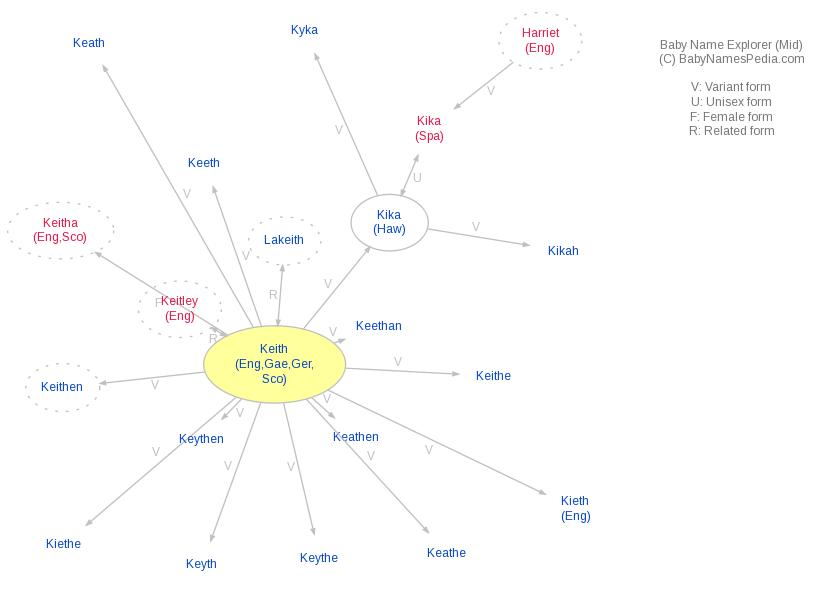