What does Kelvin mean?

[ 2 syll. kel-vin, ke-lv-in ] The baby boy name Kelvin is pronounced as KEHLVihN †. Kelvin has its origins in the Scottish language and it is used largely in English. The first name is derived from the English surname, itself of the name of the Scottish river named Kelvin, which is of the Gaelic meaning 'narrow water'. The surname was borne by the famous Irish physicist Lord Kelvin (William Thomson, 1824-1907) who developed the Kelvin scale for measuring temperature. The name could also be from Old English root elements for 'ship' and 'friend'. Its popularity has been influenced by other names such as Melvin and Calvin. The name is currently more widespread in Canada than elsewhere.

Kelvin is an all-time favorite. At present it is still somewhat popular as a baby boy name, but not as much as it was in the past. The name grew in popularity from the 1940s up to the 1960s; prior to that, it was of only very light use. Its usage peaked modestly in 1963 with 0.064% of baby boys being named Kelvin. It had a ranking of #210 then. The baby name has dropped in popularity since then. In 2018, it ranked at #802 with a usage of 0.015%. Among the family of boy names directly related to Kelvin, Clyde was the most regularly used. It was more commonly used than Kelvin by 17% in 2018. 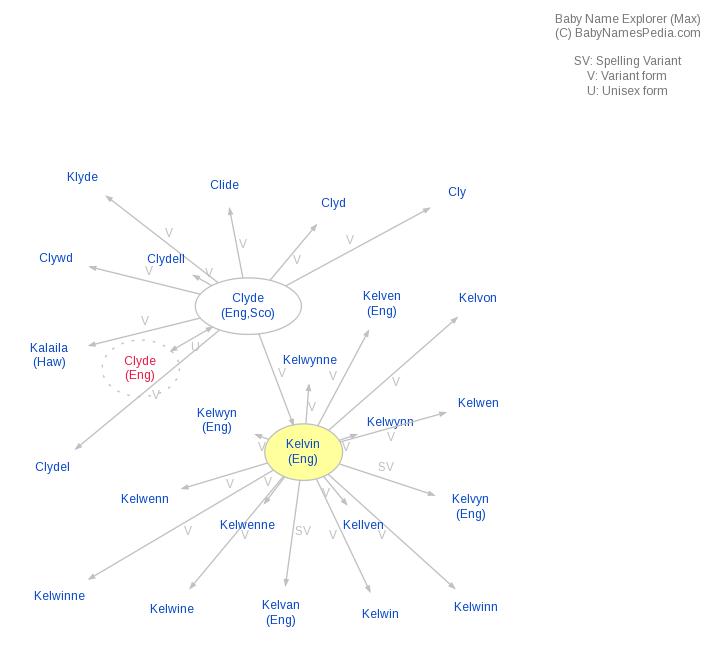