What does Kennard mean?

[ 2 syll. ken-nar(d), ke-nna-rd ] The baby boy name Kennard is pronounced KehNN-ERD or KEHNNah-D †. Kennard's language of origin is Old English and it is used largely in the English language. Cenweard (Old English) and Cyneweard (Old English) are old forms of Kennard. The old forms of the name could be from either cene (meaning 'bold, keen') or cyne as the first element, and weard ('warden, guard') or heard ('brave, hardy') as the second element. The first name fell into disuse in the medieval period. It subsequently re-appeared on an irregular basis from the 19th century, most likely derived from the surname, which itself remained in use throughout the Middle Ages.

Kennard is rare as a baby name for boys. At the modest peak of its usage in 1954, 0.003% of baby boys were given the name Kennard. It ranked at #999 then. The baby name has since experienced a drop in popularity, and is currently of sporadic use. Out of all boy names in its group, Kennard was nonetheless the most regularly used in 2018. 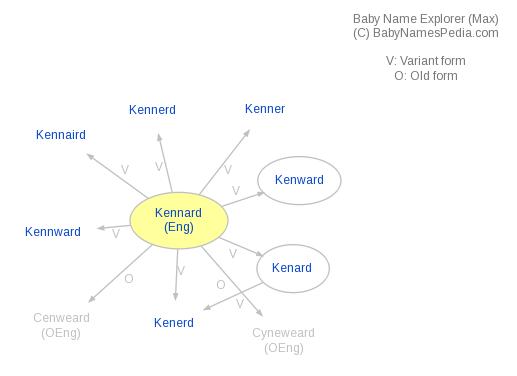