What does Kennedy mean?

[ 3 syll. ken-ne-dy, ke-nn-edy ] The baby boy name Kennedy is also used as a girl name, with the latter form being much more common. Its pronunciation is KEH-Neh-Diy- †. Kennedy is an English, Gaelic, Irish, and Scottish name of Celtic origin. The name is of the meaning ugly head; armored head. It is derived from the elements 'ceann' meaning head ; 'éidigh' ugly; armored. The first name is from the surname, Anglicized from the Irish Gaelic Cinnéidigh, which is of the elements 'ceann' and 'eidigh', or else from the Scottish Gaelic Uarraig. The first name was initally adopted by English speakers in the mid 20th century; in the USA, it is often bestowed in honor of the assassinated President John F. Kennedy (1917-1963).

Kennedy is uncommon as a baby name for boys. At the height of its usage in 1964, 0.011% of baby boys were given the name Kennedy. Its ranking then was #516. The baby name has since fallen out of favor, and is today of very modest use. Within all boy names in its group, Kennedy was nonetheless the most regularly used in 2018. Though Kennedy is currently more often than not a girl name, there was a period from 1960 to 1968 when more boys were given the name. From 1994 on, increasingly more girls than boys were named Kennedy. In 2005, girls named Kennedy outnumbered boys by 17 times. 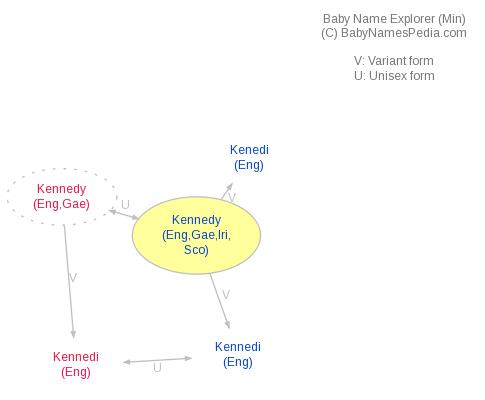