What does Kenton mean?

[ 2 syll. ken-ton, ke-nt-on ] The baby boy name Kenton is pronounced as KEHNTahN †. Kenton's language of origin is Old English and it is used mainly in the English language. The name's meaning is 'royal manor'. It is derived from cena meaning 'keen' ; cyne 'royal' ; tun 'town, settlement, homestead' ; Kenn. The first name is from the surname, which was originally given to someone from the English place name so named. The place name has the second element tun (meaning 'town, settlement, homestead'), but the first element could be from the Old English cena which was also used as a personal name Cena, or else from the Old English cyne, or else from the name of the English river Kenn. The name saw a recent boost in popularity from the appearance of a character of the name in the British radio soap The Archers (1950-), which is the world's longest running radio soap opera.

Another variant of Kenton is the English short form Kent.

Kenton is unusual as a baby name for boys. Its usage peaked modestly in 1984 with 0.009% of baby boys being given the name Kenton. It ranked at #674 then. The baby name has since experienced a drop in frequency, and is used only on a very light scale today. Among all boy names in its group, Kenton was nonetheless the most commonly used in 2018. 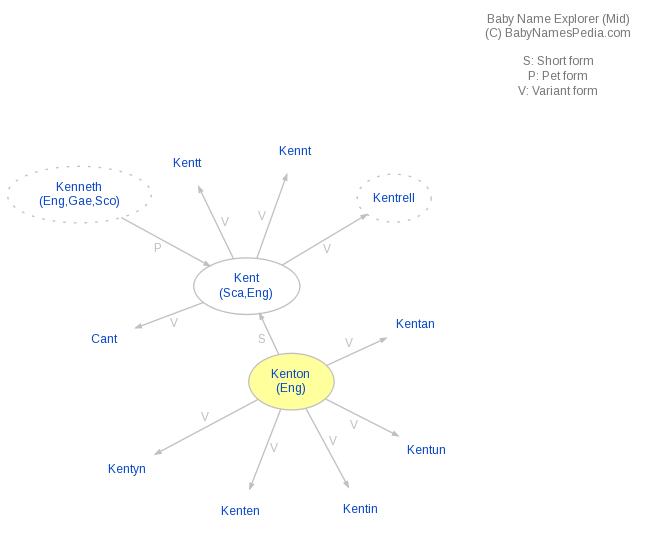