What does Kerry mean?

[ 2 syll. ker-ry, ke-rry ] The baby girl name Kerry is also used as a boy name, with the latter form being slightly more popular. It is pronounced KEH-Riy- †. Kerry has its origins in the Irish language and it is used largely in English. The meaning of Kerry is 'descendants of Ciar'. It is derived from the word ciar with the meaning 'black'. It represents the transferred use of the geographic name as a given name. See Kerry for more information.

The name Kerry is used to a great extent; it has 31 forms that are used in English and foreign languages. English forms of the name include Keary, Keiry, Ker, Kera, Kerea, Keree, Kerey, Keriam, Keriana, Keriane, Kerianna, Kerianne, Kerilyn, Kerilynne, Kern, Kerrea, Kerree, Kerrey, Kerria, Kerrianne, Kerris, Kerryann, Kerryanne, and Kiera. Other English forms include the spelling variants Keri, Kerie, Kerri, Kerrie, Kery, and Kerye. The Irish Kerrin is a form of Kerry that is used in foreign languages.

Kerry is rare as a baby girl name. At the modest peak of its usage in 1971, 0.126% of baby girls were named Kerry. It was #145 in rank then. The baby name has dropped out of favor since then, and is of only sporadic use now. In 2018, out of the family of girl names directly related to Kerry, Kiera was the most regularly used. Although there were times from 1967 to 1997 that Kerry was more popular with girls, today it is somewhat used more commonly as a boy name. 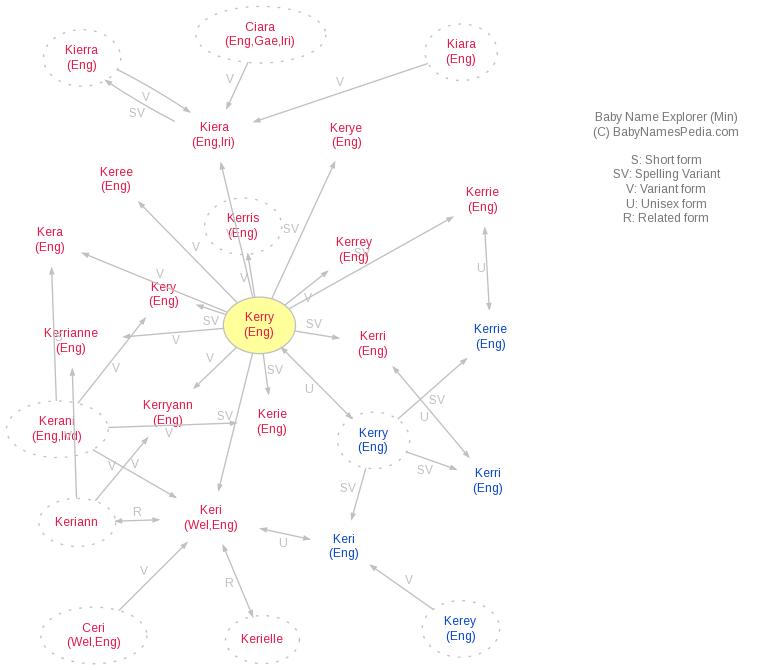