What does Kevin mean?

[ 2 syll. ke-vin, kev-in ] The baby boy name Kevin is pronounced as KEHV-ihN (English) †. Kevin is used predominantly in the English, Gaelic, German, and Irish languages, and its origin is Celtic. It is derived from the elements 'caomh' meaning fair, comely, gentle ; 'coim' kind, gentle. Coemgen (Old Irish) is an old form of Kevin. The name is Anglicized from the Gaelic Caoimhín or Caoimhínn, which are originally bynames from the element 'caomh' (meaning fair, comely, gentle), with the meaning 'fair at birth'. The name was borne by the 7th century Saint Kevin of Glendalough, the patron saint of Dublin. The name Caoimhe (English, Irish, and Scottish) is the female version of Kevin.

What are the Variant Forms of Kevin?

The name Kevin is used to a great extent; it has 39 variants that are used in English and other languages. Variants used in English include Cavan, Kaiven, Kavan, Keaven, Keevon, Keivan, Kev, Kevan (used in Dutch too), Keve, Keveen, Keveon, Keverne, Kevian, Kevien, Kevinn, Kevins, Kevion, Kevis, Kevn, Kevon, Kevonne, Kevran, Kevren, Kevrin, Kevron, Kevrun, Kevryn, Kevvy, Kewan, and Keyvan. The variant spellings Cevin, Keven, and Kevyn are other English forms. A variant of Kevin in other languages is Caoimhin (Irish).

Kevin is popular as a baby name for boys. The name's popularity rose from the 1920s up to the 1960s. At the peak of its usage in 1965, 1.487% of baby boys were given the name Kevin. It ranked at #13 then. The baby name has since experienced a loss in popularity. In 2018, its usage was only 0.162% and its ranking #125, but it was nonetheless the most popular out of all boy names in its group. The name Kevin has mostly been a baby boy name, though it has also been given to girls in the past century. In 1983, the name Kevin was given to 115 times as many baby boys than girls. 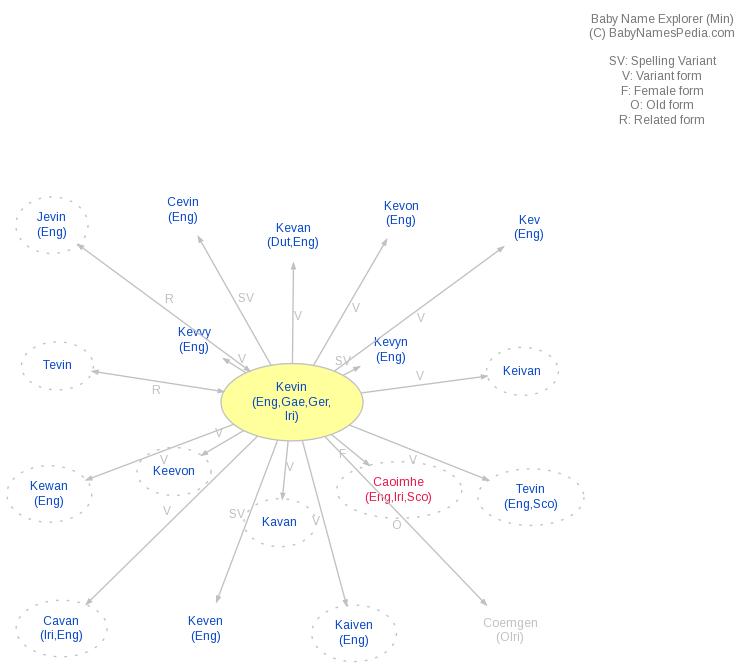