What does Keyla mean?

[ 2 syll. key-la, ke-yla ] The baby girl name Keyla is pronounced as KIY-Laa- †. Keyla is used mostly in English. Its language of origin is Celtic and Hawaiian.

Keyla is a derivative (English) of the English and Hebrew name Kayla.

Keyla is also a derivative (English) of the English and Irish name Kayley.

Keyla is also a derivative of the English name Keala.

Keyla is a somewhat popular baby girl name. The name has been growing in popularity since the 2000s; prior to that, it was of sporadic use only. Its usage peaked modestly in 2016 with 0.022% of baby girls being named Keyla. It was #682 in rank then. In 2018, its usage was 0.019% and its ranking #764. Among the family of girl names directly related to Keyla, Kayla was the most commonly used. In 2018, it was 5 times more frequently used than Keyla. 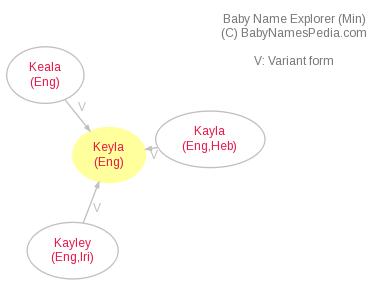