What does Kezia mean?

[ 3 syll. ke-zia, kez-ia ] The baby girl name Kezia is pronounced Kah-ZAY-ah (English) †. Kezia has its origins in the Hebrew language, and it is used largely in English and Hebrew. Qetsiah (Hebrew) is an old form of the name. The first name is derived from the Hebrew kesiah (meaning 'cassia, cinnamon') via the Greek cassia, in reference to the fragrant cassia or cinnamon tree. In the Bible, it was borne by the second of Job's three daughters, the other two being Jemima and Kerenhappuch. Job's daughters were deemed important characters as their names were mentioned rather than his sons'. The name was consequently popular with English Puritans in the 17th century. It was later borne by Keziah Wesley (-1741), the sister of John Wesley, the founder of the Methodist Church; she was also known by the nickname Kissy. She introduced the name to America, where it became popular with Afro-Americans.

Kezia is a variation of Ketzia (English).

Kezia has 23 variations that are used in English and foreign languages. English variations include Cassia, Kasia, Kazia, Kaziah, Keisha, Keshia, Kesi, Kesia, Kessie, Ketzi, Ketzia, Kezie, and Kezzia. Other English forms include the shortenings Kez and Kezi, the diminutive forms Kissie, Kissy, Kiz, Kizzie, and Kizzy, and the spelling variants Kesiah and Keziah (also used in Hebrew). Ketziah (Hebrew) is a variation of Kezia that is used in foreign languages.

Kezia is seldom used as a baby name for girls. It is not listed within the top 1000 names. 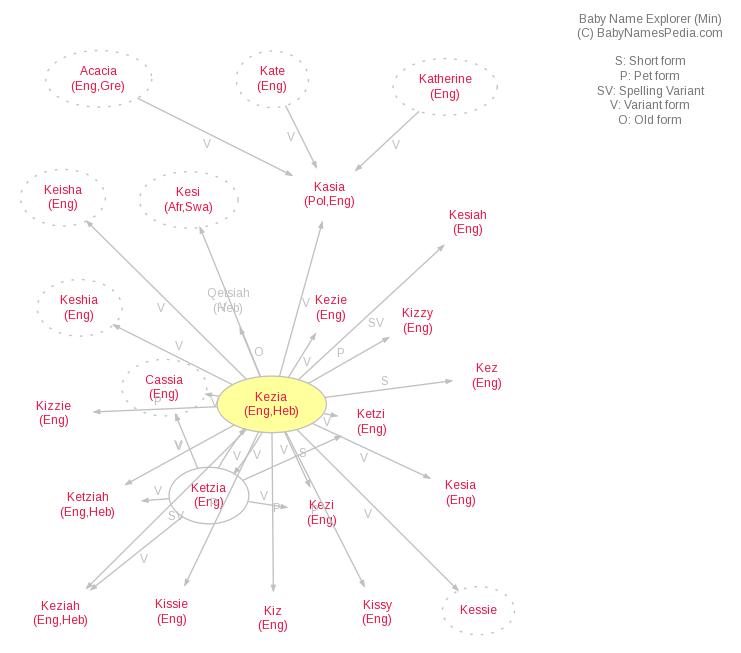