What does Khalil mean?

[ 2 syll. (k)ha-lil, kh-al-il ] The baby boy name Khalil is pronounced as K-aa-LIY-L or K-AA-Liy-L †. Khalil is an Arabic and English name of Arabic origin. It is derived literally from the word 'khalil' which means bosom friend. It represents the transferred use of the vocabulary word as a given name. The name Khalilah (Arabic) is the female form of Khalil.

Khalil has 12 variants that are used in English and other languages. Variants used in English include Halil (used in Turkish too), Kahlil, Kaleel, Kalil, Khahlil, Khailil, Khailyl, Khaleel (used in Arabic and Indian too), Khaleil, and Khalîl. Khalil-ur-Rahman (Arabic) and Khalilullah (Arabic) are foreign variants of Khalil.

Khalil is fairly popular as a baby name for boys. The name's popularity jumped from the 1980s up to the 1990s; before that, it was of sporadic use only. At the modest height of its usage in 1995, 0.056% of baby boys were given the name Khalil. It ranked at #252 then. The baby name has since experienced a fall in popularity. In 2018, its usage was 0.041% and its ranking #395, but it was nonetheless the most frequently used within all boy names in its group. 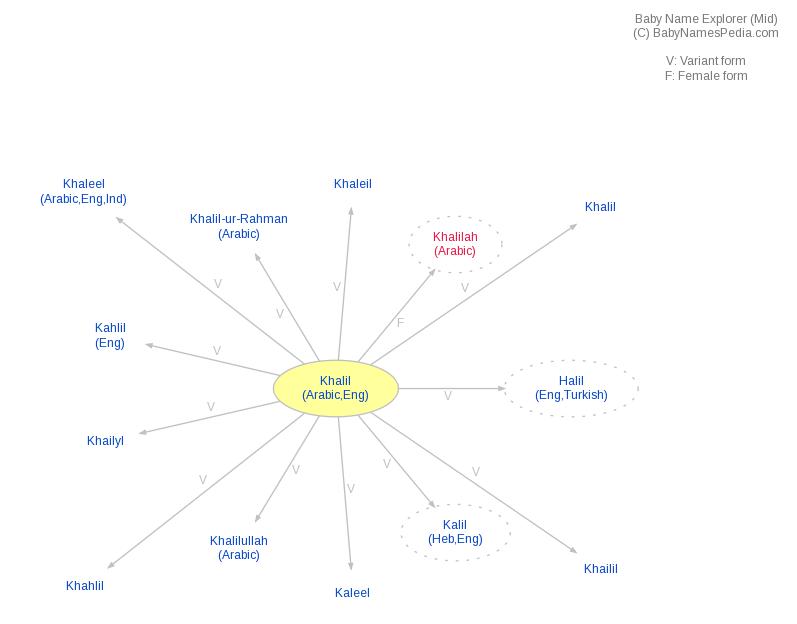