What does Kiefer mean?

[ 2 syll. kie-fer, ki-ef-er ] The baby boy name Kiefer is pronounced as KIY-F-er †. Kiefer is used mostly in Hebrew and English. It is of Hebrew and Germanic origin. From Germanic roots, its meaning is pine tree; barrel maker - in this context, Kiefer can be used in the English language. The first name is derived from the German surname meaning 'pine tree' from the elements 'kien' and 'forhe', or it could mean 'barrel maker'. It is thus a German equivalent to Cooper. The name has been made known by the actor Kiefer Sutherland (1966-), who got his first name from the surname of his father's friend.

In addition, Kiefer is a derivative of the Hebrew name Kfir.

Kiefer has 14 derivatives. Derivatives of Kiefer include Keefe, Keefer, Kefer, Keifer, Kiefert, Kieffer, Kieffner, Kiefner, Kiffer, Kuefer, and Kueffner. Other English variants include the contracted form Kief, and the diminutives Keef and Keif.

Kiefer is rare as a baby boy name. At the modest peak of its usage in 1991, 0.010% of baby boys were named Kiefer. It had a ranking of #709 then. The baby name has experienced a fall in popularity since then, and is currently used on an infrequent scale. In 2018, out of the family of boy names directly related to Kiefer, Cooper was the most regularly used. 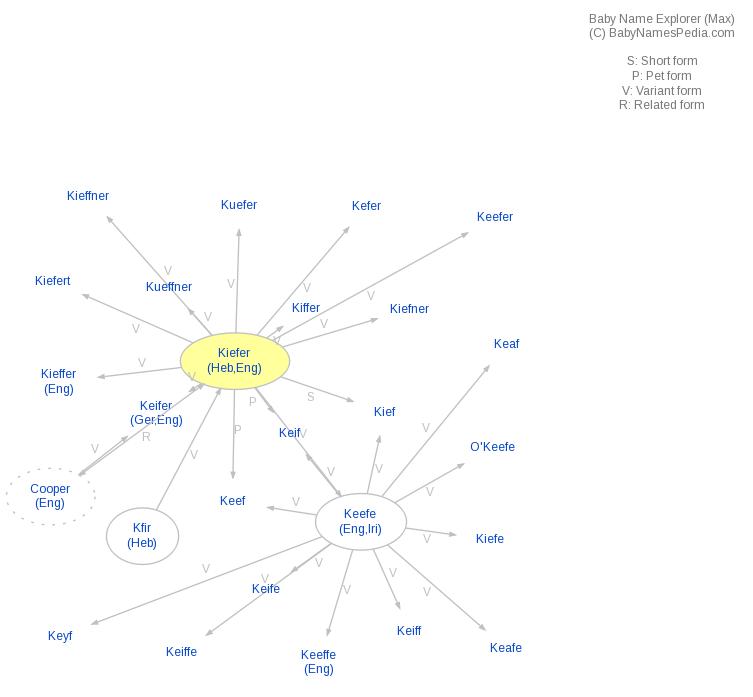