What does Kieran mean?

[ 2 syll. kie-ran, ki-er-an ] The baby boy name Kieran is sometimes used as a girl name. Its pronunciation is KIH-R-ae-N †. Kieran is largely used in the English and Irish languages, and it is derived from Celtic origins. The name is of the meaning little dark one, little dark-haired one. It is derived from the element 'ciar' meaning black. The name is Anglicized from the Gaelic Ciarán, itself from Ciar combined with a diminutive suffix. It has been borne by twenty six Irish saints, including the 5th-century Saint Ciarán of Saighir, the first saint born in Ireland, and the 6th-century Saint Ciarán of Clonmacnoise, the founder of Clonmacnoise Abbey; they are both considered among the Twelve Apostles of Ireland. The name was first adopted by English speakers in the mid-20th century; prior to that, it was mostly used in Ireland.

Kieran is an English variant of the name Ciar (Irish).

The name Ciara (English, Gaelic, and Irish) and the name Kyra (Irish) are the female equivalents of Kieran.

Kieran is a fairly popular baby name for boys. The name's popularity has been increasing since the 1990s; before that, it was of very modest use only. At the recent height of its usage in 2018, 0.030% of baby boys were given the name Kieran. Its ranking then was #497. Within all boy names in its group, Kieran was the most commonly used in 2018. In the past century Kieran has predominantly been a baby boy name. 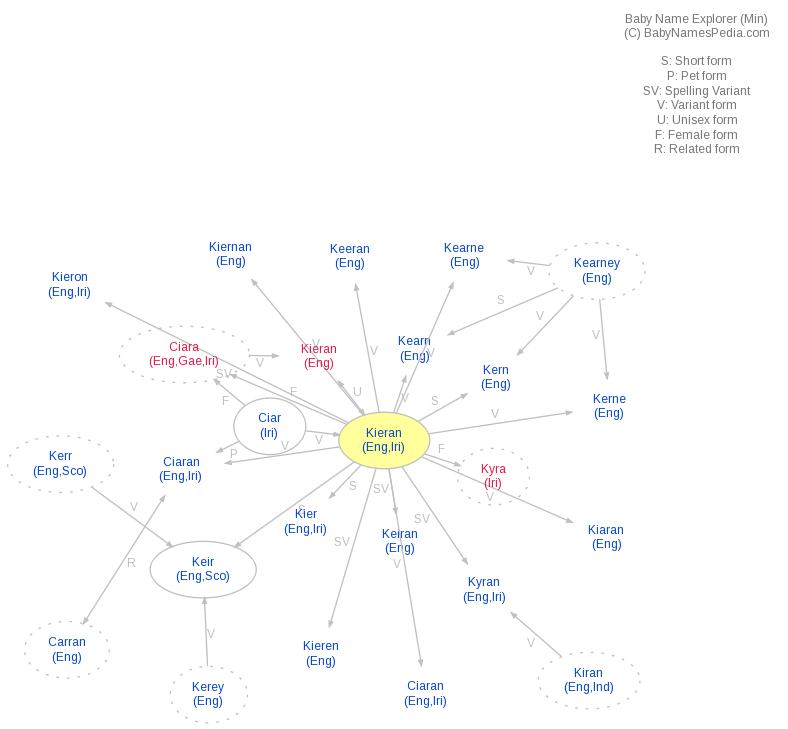