What does Kiley mean?

[ 2 syll. ki-ley, kil-ey ] The baby girl name Kiley is also used as a boy name, though it is slightly more popular for girls. It is pronounced KAYLiy- †. Kiley has its origins in the Celtic and Australian languages. It is used largely in English.

Kiley is an English form of the English and Irish Kelly.

Kiley is also a form of the Yiddish and English Kyla.

Kiley is also an English form of the English and Australian Kylie.

Kiley is rare as a baby girl name. At the modest peak of its usage in 2008, 0.052% of baby girls were named Kiley. It was #307 in rank then. The baby name has substantially dropped in popularity since then, and is used only on a very light scale now. In 2018, out of the family of girl names directly related to Kiley, Kylie was the most frequently used. Although Kiley is somewhat used more commonly as a baby girl name today, there was a period from 1971 to 1972 that it was more popular with boys. After 1978, increasingly the name became more popular with baby girls than with boys. 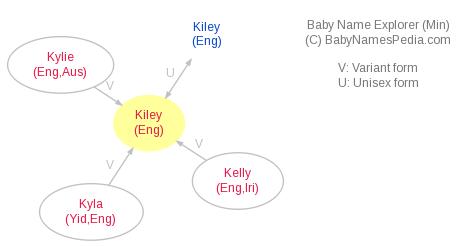