What does Kim mean?

Kim is of Old English origin. It is used mainly in English and Vietnamese. It is derived from the word cynebeald with the meaning 'kin bold, brave king'. The name was first used by Rudyard Kipling as the title of his novel Kim (1901); it is also the short form for the boy hero's full name Kimball O'Hara. In the book, the name Kimball is described as a derivative of the surname, which is itself from the Old English cynebeald meaning 'kin bold'. The book soon popularized the use of Kim as a masculine name as well as a pet name, although Kimball was itself seldom used. The masculine use was later overshadowed by the feminine, after the success of Edna Ferber's novel Showboat (1926) and the subsequent musicals and films, in which Kim is the name of a female character.

Kim is of Vietnamese origin. Here, it means 'golden'. The name has sometimes been bestowed in Vietname to balance the metal and wood

influences in a child's horoscope. See Kim for more information.

A form of the name is the English Kim.

In addition, Kim is a shortening of the English Kimberley.

Kim is also a form of the name Kim in the English language.

Kim is unusual as a baby girl name. Its usage peaked in 1960 with 0.600% of baby girls being named Kim. It was #34 in rank then. The baby name has fallen out of favor since then, and is currently used only on a very modest scale. Among all girl names in its family, Kim was nevertheless the most widely used in 2018. 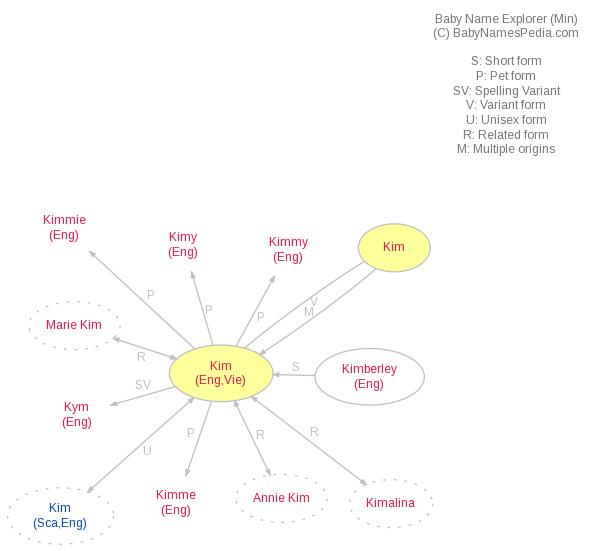