What does Kimberley mean?

[ 3 syll. kim-ber-ley, ki-mberl-ey ] The baby girl name Kimberley is also used as a boy name, though it is far more popular for girls. It is pronounced KIHMB-erLiy- †. Kimberley is of Old English origin and it is used mainly in English. The name Kimberley means 'Cyneburga's wood; Cyneburga's land'. The first name is derived from the name of the South African diamond town Kimberley, which was named after John Wodehouse, also known as Lord Kimberley; his surname is in turn from the English city of Kimberley. The English place name is formed from two elements; the first is from an Old English personal name, while the second is from leah (meaning 'wood, clearing, meadow'). The meaning of the place name is 'Cyneburga's wood' or 'Cyneburga's land'. The given name was first used in the late 19th century, often in tribute to the British victory in the Second Boer War, which was fought in the South African town. During the time, soldiers often named their children after the garrison they fought in. The name was originally used for boys, but it is now used mainly for girls.

Kimberley is uncommon as a baby girl name. At the modest height of its usage in 1967, 0.117% of baby girls were named Kimberley. It had a ranking of #166 then. The baby name has fallen out of favor since then, and is currently used only on an infrequent scale. Within the family of girl names directly related to Kimberley, Kimberly was the most popular in 2018. Kimberley has in the last century been mainly given to baby girls. 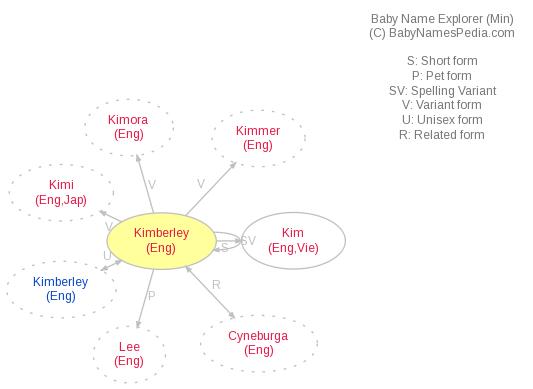