What does Kobe mean?

Kobe's origin is African-Swahili, and its use, English and Japanese. It is derived literally from the word kobe which is of the meaning 'tortoise'.

Kobe is used chiefly in the Japanese language and its origin is also Japanese. Its meaning is from the element 'kobe'. The first name is derived from the name of the city of Kobe in Japan, noted for its quality Kobe beef. The name is well-known from the basketball player Kobe Bryant (1978-), whose name was inspired by the culinary dish.

In addition, Kobe is a variant of Jacob (Dutch, English, German, and Scandinavian) in the English and Japanese languages.

Kobe is a fairly popular baby name for boys. The name's popularity jumped from the 1990s up to the 2000s; before that, it was of infrequent use only. At the modest height of its usage in 2001, 0.075% of baby boys were given the name Kobe. Its ranking then was #222. The baby name has since experienced a fall in popularity. In 2018, its usage was 0.025% and its ranking #574. Within the group of boy names directly linked to Kobe, Jacob was the most popular. In 2018, its use outnumbered Kobe's by 25 times. 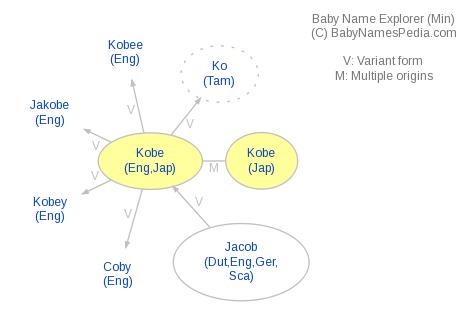